I feel to repost a post that I put up on my other blog, especially in these turbulent times and for anyone who might come over here who does not know the Lord.
He is the image of the invisible God, the first born of all creation, for in Him all things were created, in Heaven and on earth, visible and invisible, whether thrones or dominions or principalities, or authorities - all things were created through Him and for Him.  He is before all things, and in Him all things hold together.  He is the head of the body, the church, He is the beginning, the first born from the dead, that in everything He might be pre-eminent.  For in Him all the fullness of God was pleased to dwell, and through Him to reconcile to Himself all things, whether on earth or in Heaven, making peace by the blood of His cross.
Colossions ch.1 vs. 15 - 20
﻿ 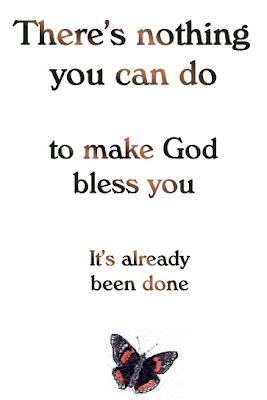 Love lies bleeding on a hill
alone and far away
for the blood of Christ shed on that cross
is still poured out today
To God there is no passing time
only a way to be
This the reason Jesus came
to save both you and me
And if you say 'We're not in chains
why need we be set free?'
just look around this present world
and tell me what you see
Do you see greed enticing man
to murder, rob and cheat
while anger, lust and envy
are roaming every street?
And where a soul lies crying
alone and in despair
do you turn away while saying
'Doesn't anybody care?'
Strong chains of sin and selfishness
are now binding all mankind
and only God's great sacrifice
can bring you peace of mind
Yes love lies bleeding on a hill
yet not so far away
for the love of Jesus .......flowing still
is just a prayer away


No longer a veil between God and you
the curtain of old has been torn in two
no more need you suffer with pain and strife
because of the sins that control your life
For Jesus was crucified in our place
and instead of the curse we now have God's grace
So step through the veil, leave the sins of the flesh
be born of God's Spirit and start afresh

But now the righteousness of God has been manifested apart from the law, although the law and the prophets bear witness to it, the righteousness of God through faith in Jesus Christ for all who believe.  For there is no distinction, since all have sinned and fall short of the glory of God, they are justified by His grace as a gift, through redemption which is in Christ Jesus, whom God put forward as an expiation by His blood, to be received by faith.  This was to show God's righteousness, because in His divine forbearance He had passed over former sins, it was to prove at the present time that He Himself is righteous and that He justifies him who has faith in Jesus.

Thank you for sharing this, Brenda, and for keeping the flame alive-- the lighthouse in the storm! 😃

Hi Sandi,
I always feel reel concern about those who do not know the Lord, and how it is so important for them to know Him. When my friend and I used to go out into the streets evangelizing we met so many people who said they would never go to a 'church' who wanted to know about the Lord. It is very important to share the truth in these troublesome times, as you too know. God bless you Sandi.

Thank you for keeping this lighthouse shining brightly, Brenda.

Hi Victor, and thank you for joining as one in the body of Christ on earth as we spread the gospel as much as we can in these times. Thank the Lord for the Internet.

Hi Brenda,
Amen and Amen. He is the Fullness of the Godhead bodily, our All in All. Thank you for sharing His perfect truth with these beautiful, Scriptural poems. May God bless you and yours,
Laurie

Hi Laurie, the more I see the turmoil going on around the world, the more I want to tell of the love of our Saviour. He is the only area of spiritual safety. God bless you and yours Laurie

Amen, Brenda! He is our Lighthouse, Tower, Rock, safety in life's physical and spiritual storms, which surely are increasing. God bless you too!
Laurie

Hi Laurie, the storms both physical and spiritual are definitely increasing in this world. I have never seen it so bad in my whole life. I am not surprised though because many in the world are going against God in much of what they are doing. God bless you and yours Laurie.