From darkness to light


The earth lay in darkness cold as a tomb
there was no warmth or light
It lay without life like a barren womb
of a woman alone in the night
....It waited for Jesus

'In the beginning the earth was formless and there was darkness over the deep.'


This is what we are told in Genesis chapter 1 vs.1 and 2.
In the same way we, carnal mankind, are born into spiritual darkness, not knowing the ways of God our creator, each person going its own way and being right in its own eyes.  Out of this status quo has come chaos on earth, with wars and dissensions arising through local and global conflicts.
So what is the light that is needed in this spiritual darkness, and where do we find it?  We are told in 1 John ch. 1 v.5 that God is light, and are encouraged to walk in that light, and Psalm 119 v. 105 says that God's Word is a lamp to our feet and a light to our path.  We are also told that Jesus is the Word of God.  So we see that the light that is God can be found in Jesus, and will direct our path.  John ch. 3 vs. 17-19 says:-
'For God sent the Son into the world, not to condemn the world, but that the world might be saved through Him.'  He who believes in Him is not condemned, he who does not believe is condemned already, because he has not believed in the name of the only Son of God.  And this is the judgement, that the light has come into the world, and men loved darkness rather than light, because their deeds were evil.'

So where is this 'plumb line to be found and how much does responsibility to change things depend upon the individual?

'My world' consists of 'myself and others', and the 'power to change my world' depends on my relationship with others, with action, reaction and interaction being the tools that I use, and choice being the hand that uses them.  The Jews have a saying, 'To save one person is to save the world'.  The Muslims have a saying 'To kill one person is to kill mankind'.  Though the Jew speaks of saving and the Muslim speaks of killing , they carry the same message, the power to promote war or peace, one through an exhortation, the other through a warning.  These sayings have no authority in my world.  They may have influence, but they have no authority.  Always the power to choose what I promote remains with me. I can blow on a spark or I can spit on it. Whatever I choose to do with the spark will also determine what the spark itself will do.  Herein lies influence.

So now you see that I am the ruling authority of the world, and I have the power to change the world, to create war or to create peace....... my world that is, I can only try to influence yours.

the problem with trying to influence someone else, even with righteousness, is that whatever you are trying to influence someone else with must be able to prove itself and stand against any argument or attack to be able to achieve its objective of convincing and convicting the person you are trying to influence.  The Bible says that 'Every Word of God proves true'. It also says that Jesus is both the Word of God and our righteousness.  Psalm 85 tells us that when we, His people, turn to God in our hearts, then He will speak peace to us, that salvation is at hand for those who fear Him.  So it appears there is choice involved.  Our part is to turn to God in our hearts and to fear Him.  Verse 11 says that faithfulness springing from the ground will be followed by righteousness looking down from the sky.  In Deuteronomy ch. 30 God says He has set before us life and good, death and evil and encourages us to choose life, that we and our descendants may live.


Once again the Earth waits 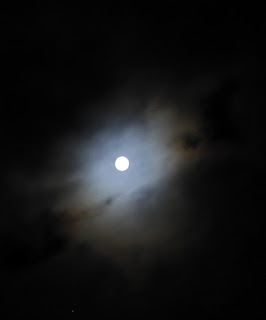 as in days of old
again there is darkness
again it is cold
But now there's a moon
to reflect the sun
to announce the return
of God's Holy One
to tell of salvation
from sin and death
by receiving God's Spirit
..... His life-giving breath
Posted by Brenda at 05:27

So much wisdom in this, Brenda. Thank you for this. We control what we allow in our hearts and our minds. We decide. Amen.

Dear Brenda,
Jesus said that although we are evil, yet know how to give good gifts to our children, how much more will our heavenly Father give the Holy Spirit to those who ask him! Luke 11:13.
Yes, you're right. If the home is established in righteousness then this can have a knock-on for the whole nation.
An excellent post, God bless.

Blogger Brenda said...
Hi Frank,
yes that is right, the moon is a perfect example of how that which has no light of it's own, but stands within a great light, is able to reflect that light. It is only when the earth comes between the moon and the sun that the moon has no light. That is why it is so important that we do not let earthly things come between us and the SON. May God continue to bless you and Alex, and all of us, with the beautiful light of His Word.

Thank you so much, Brenda.

You are welcome Victor.

Hi Brenda,
Thank you for the beautiful post. Revival must begin in each of our hearts, individually. Our heart affects our thoughts, which direct our words and actions, which reach out to our sphere of influence. Only with Christ in our heart can this influence be for good.
God bless you,
Laurie

Hi Laurie,
so true, the whole of our lives should be about learning God's ways through the One mediator between man and God, Jesus, and sharing the gospel of salvation. Life on earth is like a puff of smoke and our past can not compare to what lies ahead in our future when we allow Jesus into our hearts. God bless you and yours Lauie.

May you always share the things of God through your blog posts. I know many pass by, either ignoring your post or not but what if even one soul can be enlightened? Thank you for this. God bless and strengthen you always. - Rosel

Hi there Rosel,
it is always lovely to share and encourage one another with scripture and testimony, that is how we shall overcome the spiritual enemy. We can always see through stats on the blogs how many people visit, and it can be many more than those who leave a comment. What matters is that the Word of God (the scripture we share) can not go out and come back void to God. In our Lord there is life eternal, and He is the only mediator between man and God. God bless you and yours Rosel. Keep on sharing.

Very welcome Victor, and God bless you too.

Amen. Brenda! May we do what we can, through the power of the Spirit, to share His Word in the remaining time. Come quickly, Lord Jesus! God bless you and yours.

Amen Laurie, I think we are very close to our Lord coming back. God bless you and yours too.

Hey Brenda, Good Post, as always. The part that jumped out at me is "Every Word of God proves true.". I'm reminded by a Rabbi that once said, "When The Messiah Comes, He Will Interpret Not Only Every Word, But Every Yot and Title And The Spaces In Between." It's amazing how dynamic God's Word Is. Shalom!!

Hi Keith,
I have had so much of God's Word prove itself true, not always the way that I thought it would but even more miraculously - especially as far as healing is concerned. It is truly amazing how what is in the manual of Emanuel is far more powerful than the manual of the physician.
God bless you and yours Keith with all He has for us in our beautiful Lord Y'shua. Shalom!!

"Without a plumb line there is no such thing as good or evil - only chaos." Oh, Lord, let your light not only guide me today but shine through me to influence others for good. I love what you said in the comment above about the manual of the Emmanuel is more powerful than the physician, too, Brenda! Thank you for visiting me and praying for us. I'm claiming Jeremiah 29:11 for him too! God bless you and keep you, Brenda.

Hi Mary,
I have seen in my own life, and in others, that Word of God prove itself true so many times. I still go through trials but it is that powerful Word that brings me through them. I open my Bible to read whatever I open to every morning, and today I opened to where I had underlined long ago Mark ch. 11 vs 22-26. I do not think it coincidence that this happened just before I opened my blog and came across your comment. May God bless us with all that we have access to through Jesus our Lord, including the gift of faith, and God bless your husband through his trial with His healing. Amen.