The Lord has brought me through many trials and, although trials are on-going, I believe absolutely that the Word of God has the power to bring into existence that which does not exist.
The thing that is required to do this is 'faith', whether it be another person's or my own, and I truly believe that the more I put my faith in that Word spoken to me and persevere in my trials, the more my faith is growing.
Not long ago my friend and I were out in the streets with our leaflets and a lady and her granddaughter started talking to us.  The granddaughter was eleven years of age and her name was 'Faith'.   She started to talk about how she would love to go to Australia as she knew much about tropical fish, and went on to tell us about many things that she had learned and achieved, including a degree in karate.
As they walked away I thought about how that young girl, Faith, had achieved much in such a short time, and a sentence came straight into my mind:- 'Faith can achieve much.'
One thing stood out that I felt the Lord was speaking spiritually to me about.  I read long ago that one of the things that those learning karate do is to close their eyes and concentrate on a light bulb in order to get every other thought out of their mind. This is where the power to even break a brick with their hand comes from. This reminds me of concentrating on Jesus, the true light of the world, and not on other things that would distract me from receiving the power that is in Him
Not long after that incident happened I received a new phone for my birthday.  It was a smart phone which I have never had, and did not know how to use.  My daughter in law set it up for me while she was staying with us for a few days, and put a picture of a sea on the screen just before they left for home.
As soon as I saw the picture I was reminded of something that had happened years ago when the Lord was encouraging me to trust in Him in times of turmoil.  I had been alone in bed one morning after my husband had gone to work and suddenly the duvet on the bed turned into a sea.  It was as if I was floating on that sea, on my back.  The vision lasted for about thirty seconds.  When I went downstairs there was a Kenneth Copeland magazine that had been put through the letterbox with a picture of exactly the same looking sea and the words 'Walk on water' on the front.  I knew then that the Lord was telling me to keep my eyes upon Him and not to look at the circumstances in my life, just as He had told Peter in Matthew ch. 14 vs.22 - 33:-

Immediately Jesus made His disciples get into the boat and go before Him to the other side, while He sent the multitudes away. And when He had sent the multitudes away, He went up on the mountain by Himself to pray. Now when evening came, He was alone there. But the boat was now in the middle of the sea, tossed by the waves, for the wind was contrary.
Now in the fourth watch of the night Jesus went to them, walking on the sea.   And when the disciples saw Him walking on the sea, they were troubled, saying, “It is a ghost!” And they cried out for fear.  But immediately Jesus spoke to them, saying, “Be of good cheer! It is I; do not be afraid.” and Peter answered Him and said, “Lord, if it is You, command me to come to You on the water.”
So He said, “Come.” And when Peter had come down out of the boat, he walked on the water to go to Jesus.  But when he saw that the wind was boisterous,  he was afraid; and beginning to sink he cried out, saying, “Lord, save me!” and immediately Jesus stretched out His hand and caught him, and said to him, “O you of little faith, why did you doubt?”  And when they got into the boat, the wind ceased.
Then those who were in the boat came and worshiped Him, saying, “Truly You are the Son of God.”

I knew that once again He was saying this to me, to trust absolutely upon Him and what He was speaking to me, and not to look at the circumstances in my life at this moment in time.
I wanted the words 'Walk on water' put on my new phone screen picture but did not know how to do it .  I asked two people to help me, but they did not know how to do this either. 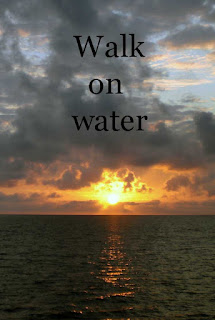 The following Sunday I went to the church gathering I had been attending for a few weeks and the man who was speaking said that the theme that he was going to speak on was 'Walk on water.'  I could not believe it! - yet, after all the things that have been happening in my life, and how the Lord is encouraging me more and more to trust in Him, it did not really surprise me that this was being spoken to me.  I shared my testimony with the people there, and I hope that it will encourage them to trust in the Lord to be able to do what is not possible for man to do, as many of them are sick.
I then phoned my son to ask if he could tell me how to put the words 'Walk on water' on my phone screen. He suggested that I put  these words on one of my own pictures of a sea that I had taken and email it to myself so that I could use it on my phone.  I managed to do that.

I know that, just as Peter had to keep his eyes on the Lord, I too have to keep my eyes on the Lord, and act on the Word He speaks to me, in order to receive the promise of God regarding healing - which is 'YES' in Jesus.

One other thing that stood out to me was:- Even though many people in the churches have said to me that I should not  be going around to different churches all the time, I know that if I had not followed the Lord's instruction regarding this I would not have been in the right place at the right time to hear what the Lord has been saying to me.   As the scripture says:-'God does not live in a house made with human hands.'
I say these words of thanks to my wonderful Lord for the Words of encouragement found in Him as my One and only mediator between me and God.

Thank You Lord for bringing me through
these trials so heavy - for without You
great patience and tolerance I could not have learned
and lack of forgiveness would surely have burned
For the verbal abuse might have caused me to hate
being told by the enemy 'Retaliate'
But in all circumstances You have been with me
as I  walk upon my 'troubled sea'
being shown I must keep my eyes upon You
in order for that Word to prove itself true
Posted by Brenda at 06:58 33 comments: Links to this post