One day, when I was looking on some old floppy disks for photographs I came across a file entitled 'Judgment begins with the house of God', something I had written some time back. So I printed it out and read it.  The following evening, on a digital imaging course, I was given some homework by my tutor.  It was to take photographs on the theme 'Shadow and substance'.  Just before I made the bed on the following  morning I noticed the shadows falling across the crumpled sheets and pillow cases.  I thought of the sentence ' You make your bed and lie on it', and thought 'What a perfect title and photograph for a project, either as a fact or a suggestion, I could do something with this.'  The sheets were covered in a pattern of roses and I thought 'We can either make it a bed of roses or something else.'  So I took two photographs, one with the sheets crumpled and one with the bed make.  Then I remembered that within the piece I had written on Judgement there was a poem called 'Lukewarm' which contained a line or two referring to a bed.  I thought maybe this was not coincidence, that the Lord may be showing me something here.
Lukewarmness is spoken of in one of the seven churches in the book of revelations.  All the churches except one are tolerating something that is ungodly within its bounds, the difference with the Philadelphian church being shown in ch.3 v.8 'For you have a little strength and have kept my Word and have not denied my name.'
Just as in Isaiah's day the Lord's judgment had come upon His people because of their unfaithfulness, 'for Jerusalem has stumbled and Judah has fallen because their speech and their deeds are against the Lord, defying His glorious presence.' (Isaiah ch.3 v.8), and seven women were taking hold of one man in that day saying, 'We will eat our own bread, and wear our own clothes, only let us be called by your name, take away our reproach. (Isaiah ch.4 v.1), so too God's judgment is upon His people today, who can be likened to the seven churches who want to be called by one man's name (they want to bear the name of Jesus Christ, to take away their reproach), but they want to eat their own bread (their own doctrine ) and wear their own clothes, the clothes of a spiritual prostitute,(Isaiah ch.3 vs.18 - 23), instead of their robes of righteousness.
Verse 2 of 1 Peter ch.1 says that it is for obedience to Jesus Christ that we are chosen and destined by God and sanctified by the Spirit.  We are lukewarm Christians if we are only half obeying the Lord and half following our own way.  We are not exempt from God's judgment because we wear the name of Christ.  Indeed, judgment begins at the house of God as spiken of in 1 Peter ch.4 v.17, and here 'the house of God' refers to Christians, verse 18 saying that the righteous man is scarcely saved.  Today the church is in a much worse state than it was two thousand years ago.  We are in the end times, expecting our Lord's return, the time of the ten maidens and the servants accounting for the talents.  Without the oil of the Holy Spirit our lamps will go out, and if our talents are hidden and not invested with the bankers they will not make interest.
We are at the stage where 'even some of those with understanding shall fall, to try them and to purge and to make them white, even to the time of the end.' (Dan.ch.11 v.35).
Peter foretells that there will be false teachers in the church just as there were false prophets also among the people of Israel.  We can see this happening today with strange doctrines popping up in different places that are not in line with God's Word.  It has become fashionable to please man rather than to please God.
Some of us have become lukewarm Christians.

LUKEWARM
People say 'Don't speak about your king don't speak about this Jesus to me
Don't tell me I must follow Him down the road to Calvary'
They say 'We'll just be called by His holy name but leave us to eat our own bread
And we'll wear our own apparel' then they labour to make their own bed
But the covering on it is narrow and the bed itself is too short
Both getting smaller and smaller as they're judged by each ungodly thought
They're building mighty castles Lord, they don't have Your foundation
Building castles for themselves, strongholds big and wide
With hewn out stones and polished beams they've built their own creation
And now they put their images inside
Everyone right in their own eyes abiding in vanity
Spinning ever faster Lord towards total insanity
Not hearing the voice of the Master, but listening to a lie
Outside they appear to be living yet inside they slowly die
They're seeking to worldly physicians to bring about their release
Looking to man for deliverance yet never finding peace
Not willing to take Your chastening 'Too grievous for me' they say
Forgetting that at the end of each night there is always the light of day
And all the time Lord You're trying to take away our shame
Visiting each one in turn calling out each name
Saying 'Return unto me child, seek the face of your Lord above
For it is he who keeps my commandments that shall abide in my love'


Yes, sometimes we as God's people can be lukewarm when it comes to following the Lord, and we can have 'itching ears', not wanting to endure sound doctrine but heaping to ourselves teachers after our own desires.  We can turn our ears away from the truth (2 Timothy ch.4 vs.3,4).  There is a warning in 2 Corinthians ch.11 vs 3,4 about listening to another Jesus, another gospel, being led astray from a sincere and pure devotion to Christ.

If we make our own comfortable spiritual bed then we will have to lie on it, and the covering on it will be no protection against the judgement of the Lord.  Isaiah ch.28 v.20 says that the bed is too short to stretch oneself on it and the covering too narrow to wrap oneself in it.

After I had written this article my husband was making the bed one morning as I returned from the bathroom.  I could hardly believe what he said to me.  When I bought the sheets with the roses on they had been two box fitted sheets.  They did not have a top sheet to match, so I bought the two base sheets in order to make one of them into a top sheet.  However, the material available to me was not enough to make a full width sheet.  As I walked into the room my husband said 'You will have to do something about this sheet, it is too narrow.'
the message in Isaiah ch.28 was to those who ruled the people in Jerusalem.  When I added this line onto what I had typed, I opened my Bible twice to  Isaiah ch. 30 where I had verse one encircled.  It reads 'Woe to the rebellious children who carry out a plan but not mine, and who make a league but not of my Spirit.'
The same message applies to us as God's children today.  God is a loving God and He does not want us to stray from His protection.  We learn from Him line upon line, precept upon precept and He reveals to us where we are in danger of missing the mark, gently guiding us back to the light.
The project that I finally took into class on 'shaddow and substance' was:- 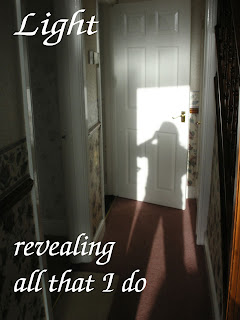 Thanks for the visit and also for the gracious comment you left. I’ve been following and enjoying your blog for a while now and would like to invite you to perhaps follow me back. I had always thought you did but your profile doesn't show it. Sorry I took so long for the invitation

Really good post Brenda, well written and thoroughly informative. I've joined your blog and will be coming here regularly to read your posts.

p.s. I made a typo in the first comment!

Great post. What's interesting is that here in Canada at least and I suspect around the Western world the churches that have basically thrown out the Bible and are preaching pleasant things that don't offend people are going bankrupt. They are full of people who are old and dying and those elderly members aren't being replaced by younger people.

Hello Alex,
I agree that many churches appear to be trying to please man and seem to have thrown out the Bible. I am not sure whether anything is to do with age. I think one of the main problems is that some of those placed in charge of the churches are not necessarily appointed by God. I think the same situation spiritually exists in the church as did two thousand years ago - as in Jesus and the Pharissees.