When each part is working properly


Last Saturday I was in a ladies meeting at somebody's house and was given something to comment on that was talking about geese.  A post I had put up on my blog about three years ago came into my mind and I have decided to put it up again. Hope you enjoy reading. 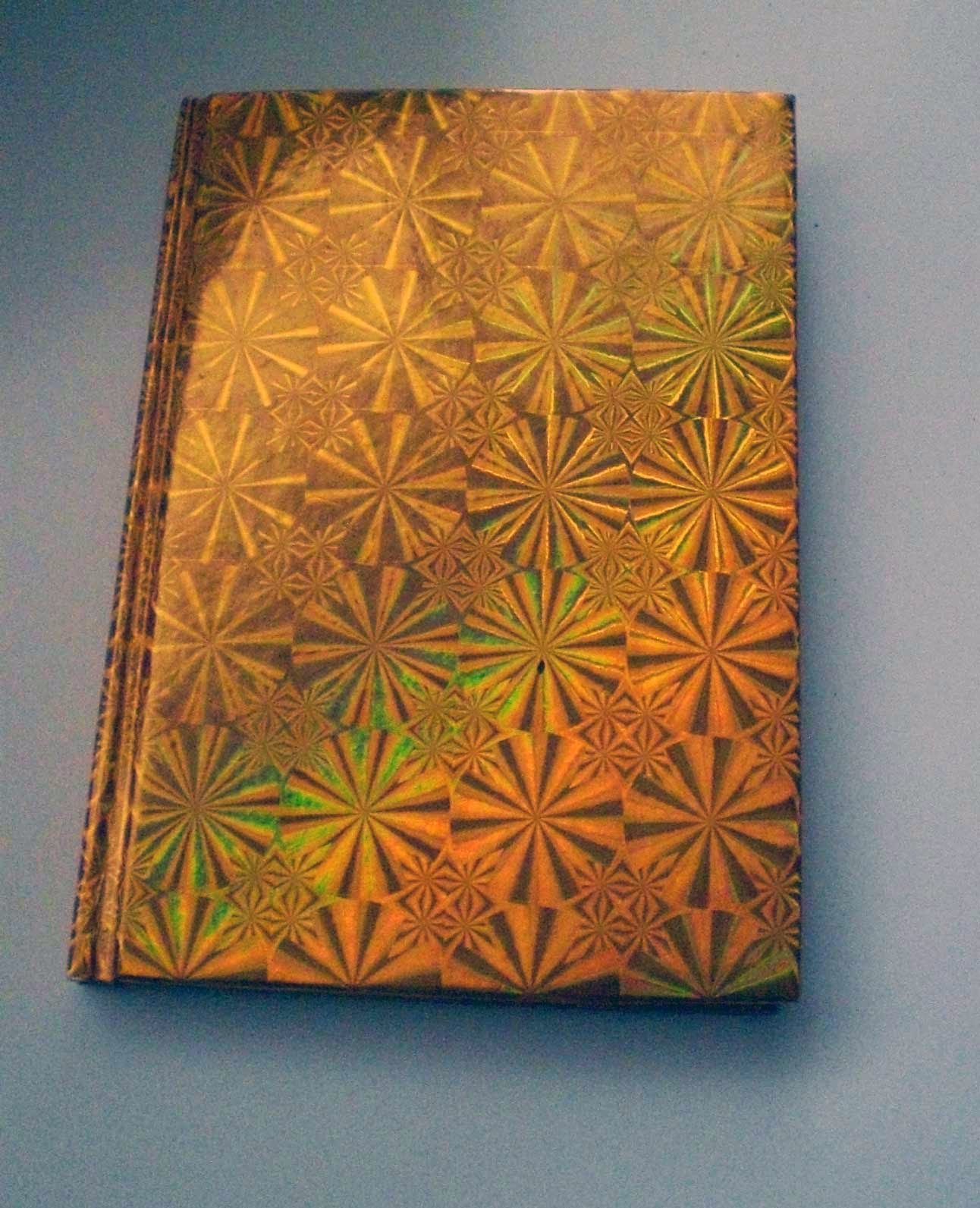 I have a little gold book by the side of my computer, one of the diaries that I have written in.  I opened it and noticed that the page I had opened to had many of the things written in it that were in the article 'Rapture'.  So I have decided to put up this post, edited,  so that I can re tell in the present time what happened at that time.


Rapture
Several years ago I had a dream in which I was looking at certain stars in the sky.  As I looked at them they appeared to grow in explosive glory, yet were not destroyed.  It was absolutely beautiful.  In the dream my husband was stood nearby and I asked him to look at the stars, but when he looked he saw them as normal stars.  Then some other people came along who were unbelievers, and I asked them to look at the same stars.  They too saw them as normal stars.  A short time after I had the dream I bought some new gold coloured curtains, and when I got them home and went to take them out of the packet I noticed they were called 'Rapture', and that the pattern on them was very much like the exploding stars that I had seen in my dream.  The word 'rapture' means 'to be carried to a state of extreme joy', and that was exactly the state I had been in, watching the stars in my dream.
Soon  after, I went to the church that I was attending at the time and the pastor was saying that he and the family had visited a waterfall in a local park.  Then a lady spoke of waterfalls of wine, the pastor following on speaking of how new wine could not be put into old wineskins but had to be put into new wineskins.  I noticed that the lady who spoke on 'waterfalls of wine' had a dress on with an almost identical pattern to my curtains, only the background colour was brown instead of gold.
I told my son, who had moved to the area recently, that the waterfalls were there, because he had said that when he moved down here from Scotland he wanted to visit many of the waterfalls in the area.  He said he knew of the waterfalls that the pastor had spoken about, and that they were partially man made.  Again I felt that something was being pointed out to me, that the waterfalls that were partially man made and the dress with the brown (representing earthly wisdom) background colour could be speaking spiritually of man's interference with God's word and the Holy Spirit in some way and that if it was, then the Lord would reveal more to me if I prayed and waited.
Some time after, I was reading 2 Kings chapter 2 where the men of the city were telling Elisha that the situation of the city of Jericho was pleasant but the water was bad and the land was unfruitful.  Elisha asked for a new bowl and put salt in it.  Then he went to the spring and threw salt in it, and the word of the Lord came to him to say that the water was made wholesome and that neither death nor miscarriage would come from it.
After I had read this I was thinking about sharing my thoughts with the pastor at the church, and I reached for my UCB daily reading book.  When I opened to the reading for the day it was saying that we all have gaps and that the best way to handle the weaknesses was to work together and it was encouraging us to work more together and not to be like  Diotrephes who not only refused to welcome the brethren, but also stopped those who wanted to welcome them. 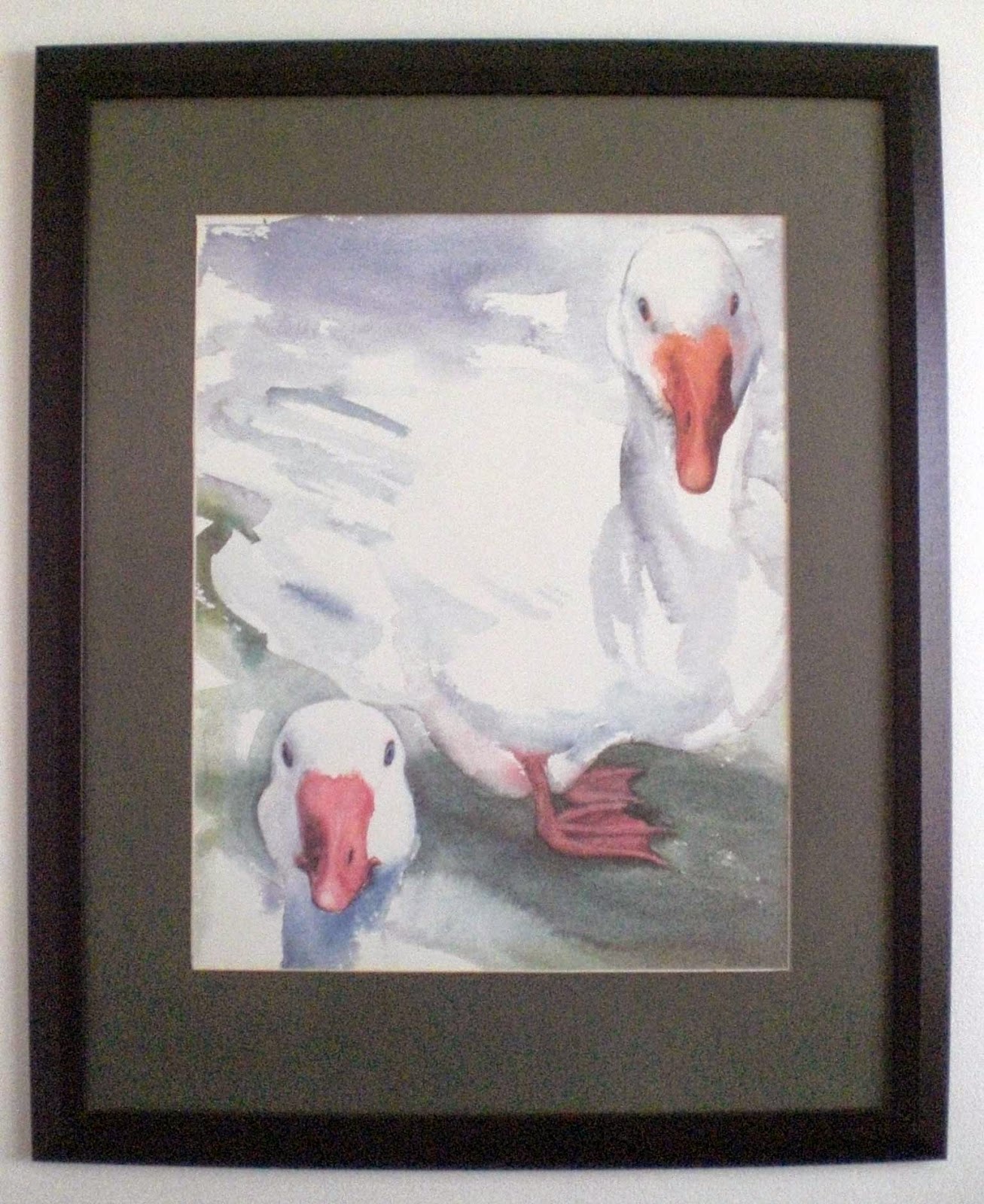 I was about to put up on my front room wall a print of two geese painted originally in watercolour.   I was reminded of a book I have called 'Why geese fly farther than eagles'   The following is a paragraph from that book which reflects to me the way the body of Christ should function as stated in Ephesians chapter 4 verse 16 '....... joined and knit together by every joint with which it is supplied, when each part is working properly, makes bodily growth and up builds itself in love.' 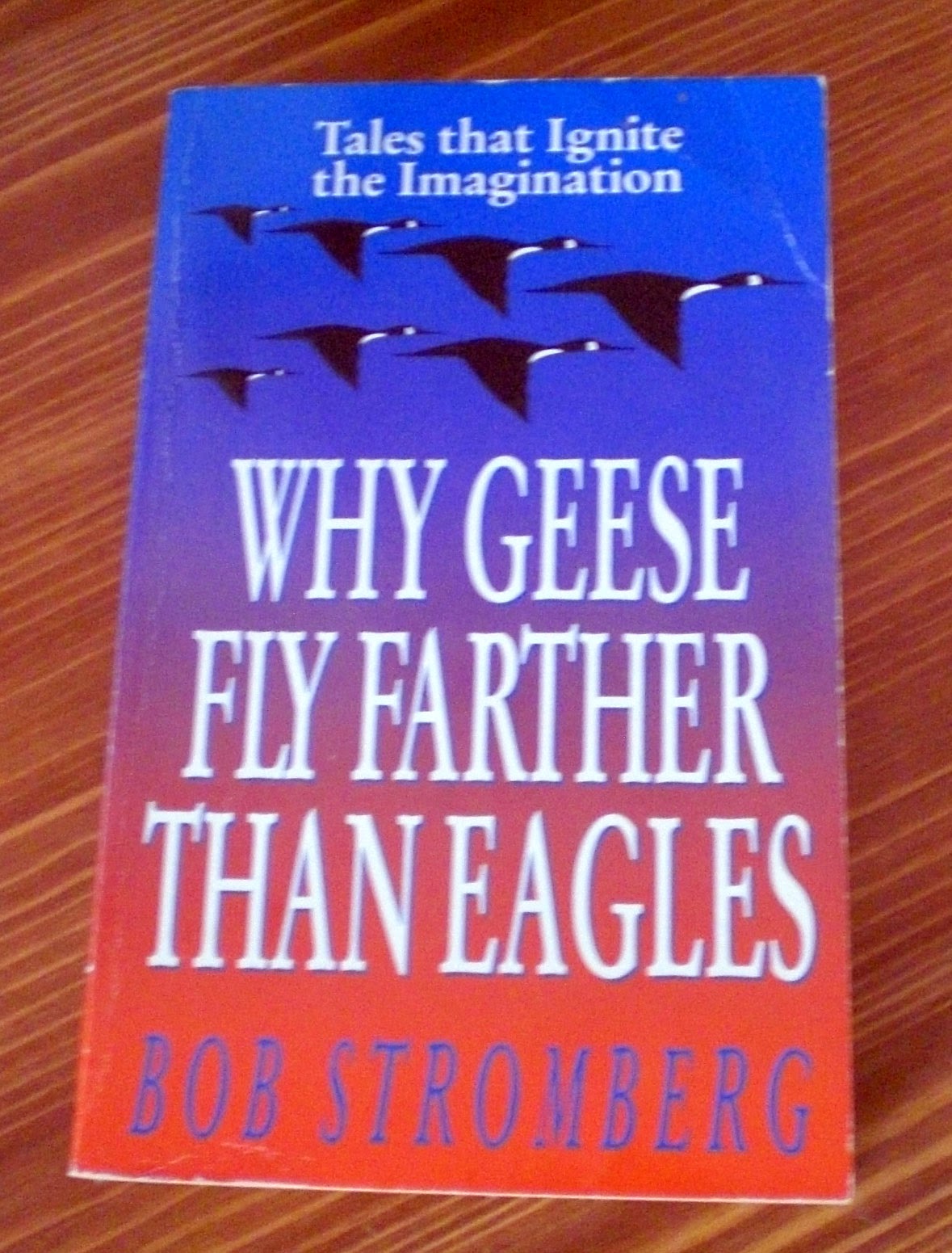 'When the head goose grabs the wind, air is displaced, which then rushes up to reclaim its space only to see the smiling face of the bird flying behind, whose wings just happen to be in the downward position - a very dangerous condition, which doesn't last for long, because the upward rush gives them a push, and they're right back up where they belong.  This goose then grabs the air again, causing another upward wind, which lifts the bird behind.  And so it goes on down the line.  So the head goose breaks the wind, and all the rest are carried by him, with very little effort, I've heard, on the part of any one bird.  When the head goose has had enough, he or she simply drops back and depends on another bird for strength when strength is what is lacked.
So that's how I found out how the goose can fly from up north to way down south and back again.  But she cannot do it alone, you see.  It's something that must be done in community.  These days it's a popular notion, and people swell with emotion and pride when they think of themselves on the eagle-side, solitary, self-sufficient, strong.  But we are what we are.  That's something we cannot choose.  Though many would wish to be seen as an eagle, I think God made most like the goose.'
That Sunday the pastor of the church that I attended was saying to my friend and myself that if anyone has anything they want to share during the service they have to speak to the appointed convener about it and he will decide whether it should be shared or not.  Does not 1 Corinthians ch. 14 v. 26 say 'What then shall we say, brothers and sisters? When you come together, each of you has a hymn, or a word of instruction, a revelation, a tongue or an interpretation. Everything must be done so that the church may be built up.'

A few Sundays previous it was preached in church that if people did not go to the doctors with certain sicknesses they would die.
I had been trusting in the Lord solely for a particular healing  and when I got home that day I sought the Lord regarding what had been spoken in church and I opened my Bible to read.  On the page in front of me was a verse in Psalm 118 that I had underlined some time previous.  It reads ' I shall not die, but I shall live, and recount the deeds of the Lord.'  I asked the Lord if He was speaking this word to me, closed my Bible, and opened to exactly the same page, with the same underlined verse speaking to me.
I have to ask, ' If I had asked the Lord this question in church that morning and opened my Bible to this verse twice, would I have been allowed to share this with the church or would the convener have thought that it went against what was being preached regarding 'going to the doctors or dying' and disallowed it, thereby denying this testimony which might have strengthened and encouraged somebody else ?'
Surely there can only be one convener in the church, the Holy Spirit, and are we guilty of trying to interfere with His work by bringing in our own rules instead of following the guidelines of the scriptures when we come together. Daniel ch. 2 v.44 reads:- 'And in the days of these kings the God of heaven will set up a kingdom which shall never be destroyed; and the kingdom shall not be left to other people; it shall break in pieces and consume all these kingdoms, and it shall stand forever.'

We must not be afraid of a little 'salt' in case it might offend.  Jesus says that we, as believers, are the salt of the Earth:- “You are the salt of the earth; but if the salt loses its flavour, how shall it be seasoned? It is then good for nothing but to be thrown out and trampled underfoot by men.  (Matthew ch. 5 v. 13)
Why, in my dream, did not my husband or the unbelievers see the full glory of the stars in the heavens?  I could understand why the unbelievers did not see it, but my husband has been baptized and believes in Jesus.  Was he representing somebody who believes but can not see the full glory because he is guided largely by worldly wisdom and knowledge?   Jeremiah ch. 15 v. 16 reads:- 'Thy words were found, and I ate them; and Thy word was unto me the joy and rejoicing of mine heart; for I am called by Thy name, O Lord God of hosts.'
Nehemiah  ch. 8 v. 10 contains the words 'the joy of the Lord is your strength.'

In order to be carried to that 'extreme state of joy',  the word of the Lord has to be our strength.  Then we shall be able to put off the old brown (earthly) wineskins and put on our new gold (Christ like )ones?
Posted by Brenda at 02:36 25 comments: Links to this post