A time for everything

Sometimes we may feel as if bad times have come upon us, when various circumstances and certain people come into our lives. However, what we do not realize is that what appear to us to be bad times can sometimes, according to the Lord, be good times. We are told that if we love God then all things will work together for good for us. Sometimes things are sent to try us and test us, and even to change us and our way of thinking about people. Just because they do not seem the kind of person we like, or their personality is not what we are familiar with it does not mean that they are not the best kind to be in our lives at a specific time. Ecclesiastes ch. 3 v.1 states that 'To every thing there is a season, and a time to every purpose under the heavens', and I can look back over my life and see that this is very true. People who are very different from what I have been used to have been brought into my life several times, bringing me to face a challenge that will either change me or change that person.
Life is a journey, and it is on-going just as the Israelites journey was on-going through the wilderness towards the promised land.
The following are two poems which metaphorically speak about the trials in life.
The first one is called 'The Garden', and speaks of rejection being turned around to acceptance through seeing something, or someone,  that we did not want in our lives from a different perspective.

The Garden
'How pleasant is our garden' the flowers said one day
while basking in the morning sun then they heard the gardener say
'I think I'll plant an onion to see if it will grow'
and looking round the garden sought a place for it to go. 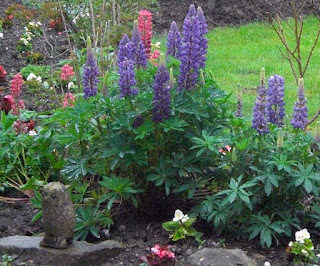 'Oh no!' cried out the marigold 'Don't put Onion next to me. 'What about beside the pond or under that old tree?' 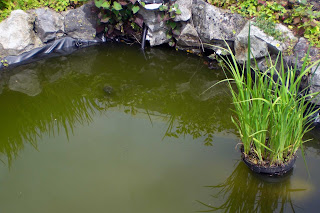 'And why then should I suffer?
replied the noble oak.
'And neither do we want it here!'
the frogs began to croak.
And   so the gardener scratched his head and said 'What shall I do? somewhere within my garden must be a place for you.'
The onion cried within his heart, the tears began to roll .  He prayed 'Lord, I'm created too, find a place for this poor soul.'
And then the gardener heaved a sigh and said 'The only thing is to put this onion by the fence, with the weeds that choke and sting.' 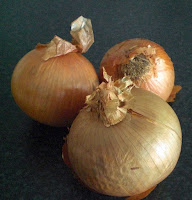 The onion was so happy, at last was found a place. The gardener went and brought his spade, the onion dried its face. How happy was the little plant once settled in the ground. He spread his roots and raised his head, began to look around. A sudden sound of crying began to reach his ears. 'Oh no, what now.' the onion said. 'Who's shedding all those tears?' But mingled with the crying 'Hip, hip, hooray' was heard. A sigh of hope, and maybe not rejection as he feared.?'
The sobbing wasn't coming from the marigold or oak, but coming from the nasty weeds, the ones that sting and choke. By now the weeds were withering, the thistles gasped for breath, for the presence of the onion could only mean their death. The flowers now with shouts of glee to the onion did lean and bend, for what was seen as an enemy had now become their friend.   So if in your midst there's an 'onion', who sometimes makes you cry, put him amongst your thistles and weeds. Who knows......? Maybe they'll die.

This poem could go on and on, for although the Onion is metaphorically portrayed as a person who is rejected because of it's looks according to people's opinion, the Nettle is portrayed as a person with a 'sting' in it.  Yet nettles are a source of food to a butterfly, and the butterfly to me would portray a born again believer, having the ability to 'rise' in Christ.  So 'Nettles' can spiritually portray a person that God can use for correction ( which the 'sting' can metaphorically refer to),  and its' dying can spiritually portray the rejection of a now proud personality of one who was once rejected themselves (as in the onion), thereby killing off that correction by not heeding it.
As far as calling some plants 'Nasty weeds that sting and choke', that may be what they appear to be to me because they can take over my garden, by growing very quickly, but according to scripture there is purpose in  everything that God has created.

So too,  we can never judge another believer by the small amount we perceive of them, for we are all parts of the body of Christ and are all being used to build one another up in the Spirit. When we speak the truth in love.  Ephesians ch. 4 v.15b states:-
'we will grow to become in every respect the mature body of Him who is the head, that is, Christ'

and
2 Corinthians ch. 3 v.18 states:-
'And we all, with unveiled face, beholding the glory of the Lord, are being transformed into the same image from one degree of glory to another..'
The second poem   is about  not  judging a situation or a person just by its 'prickly' side but seeing its beautiful and fruitful side also.
The Bramble 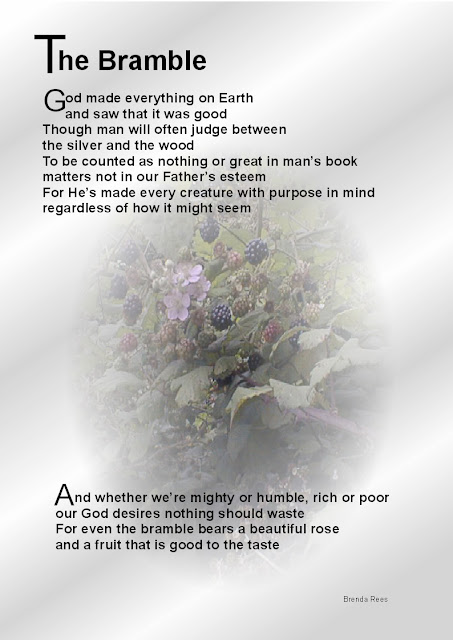