Ever since I have been born again of God's Holy Spirit I have endeavoured to go wherever the Lord leads me.  Most importantly is the going out into the streets with a sister in the Lord with leaflets that we believe the Lord encouraged us to put together many years ago soon after we met, which we hand out to people who wish to take them. 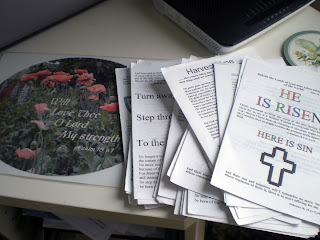 We can truly say that we have never had a rude or aggressive response from a person when we do this.  We get people who do not want to take a leaflet, who actually are very polite and apologise for not taking one.  As in John ch. 6 v. 44 Jesus says 'No one can come to me unless the Father who sent me draws them' we know that it is not the time for those particular people.


Then there are the people who we believe God  is calling to Jesus, we being either the ones that plant or the ones that water. It is only God Who can add the increase, as it says in 1 Corinthians ch. 3 vs. 7-9 'So neither he who plants nor he who waters is anything, but only God who gives the growth.  He who plants and he who waters are equal, and each shall receive his wages according to his labour.   For we are God’s fellow workers; you are God’s field, God’s building.'
Just as there is a time to be born in the physical there is also a time to be born in the Spirit.
We also get people who are believers who stop and talk to us and that is good,  as Acts ch. 7 v. 48 states ' However, the Most High does not live in houses made by human hands. As the prophet says:' and in Matthew ch. 18 v. 20 'For where two or three are gathered in my name, there am I in the midst of them.' 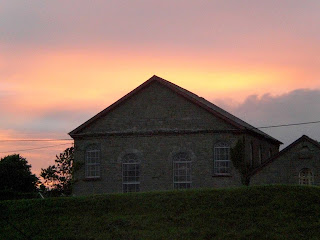 When I look out of my lounge window I can see a church building that has closed down , and I have to wonder 'Is this because man's  traditions have made void the Word of God there' and so God did not add the increase?

Out in the streets my friend and I are able to speak of Christ crucified freely to people, and we see many people drawn to Him and wanting to know more.

Sometimes we can be deceived in thinking that everyone who speaks in a church is speaking the Word of God.  However, we are told in the scriptures that there will be wheat and tares growing together in the kingdom of heaven.
Recently, my friend and I were in a church gathering that the Lord had led us to a few weeks previous.  The pastor there invited the Holy Spirit to come.  It went quiet, then I felt a song come into my mind and I began to sing it.  It was the chorus 'My God is so big, so strong and so mighty, there's nothing that He can not do'.  After I sang those first lines I was stopped by the pastor.  I said, 'But you asked the Holy Spirit to come '  He told me that he had been elected as pastor by the people there so he could tell me to stop.  Both my friend and myself told him that the scriptures said otherwise, and we referred to :-

1 Corinthians ch. 14 v. 26  which says:- What then shall we say, brothers and sisters? When you come together, each of you has a hymn, or a word of instruction, a revelation, a tongue or an interpretation. Everything must be done so that the church may be built up.

I have to say that I would think  the chorus I felt led to sing would have built anyone up.  He still would not change his mind.  Then I said 'It has come into my mind to shake the dust off our feet', and my friend said that it had also come into her mind. The pastor said 'Then shake the dust off your feet' 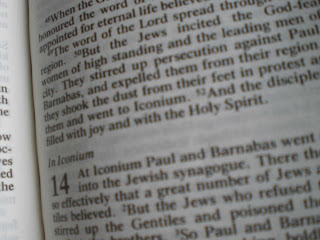 I felt very strongly to reach into my bag for my Bible and opened it to Acts ch. 13 where verse 51 and 52 read:-
'But they shook off the dust from their feet against them, and went to Ico′nium.  And the disciples were filled with joy and with the Holy Spirit.'


I have to say that the first verse is exactly what we did and the second verse is exactly how we felt. Last night I had a very vivid dream where I was at a Christian wedding.  I was approached by a young man who brought several little children to me and asked me to look after them.  There were people at the wedding who I knew to be adulterous, I could hear them but could not see them.  I felt this was revealing the spiritual adultery  within the church as in 'teaching as doctrines the precepts of men.' (Mark ch.7 v.7)

I feel that my dream is a warning, and that we must look after God's spiritually young children.  We must encourage them to seek the Lord for all truth in a time of the wheat and the tares being in the KINGDOM OF HEAVEN,(Matthew ch. 13 vs. 24-30) and not allow the infiltration of man's traditions to make void the word of God, (Mark ch. 7 v. 13) thereby allowing the thief to rob them of the truth. Whatever anybody says to you, search the scriptures to see if it is true.