I just want to share a couple of poems I wrote regarding the Lord and Christmas time.
The first is one I wrote when my husband and myself were living in a house back in Wales some years ago.  We had a little rescue cat that had been found in a stable, and she is mentioned also in this poem.

It's Christmas day and it's late afternoon
I lie on my couch in my cosy back room
I look through the archway towards the French doors
out into the garden where black ragged claws
of firethorn branches are reaching high
with nail-like thorns into sullen sky
The Christmas tree stands in the darkening room
casting radiance and light into unlit gloom
Messiah is playing on classic CD
as a feeling of timelessness hangs over me
The kitten sleeps - found in a stable they said
was in a bad way - she was almost dead
but why is there here a sense of holiness
when all that I gaze upon speaks of lowliness
There's something else here in this down -to-earth place
there's a message of mercy - a message of grace
The lights, the stable, thorns, arch and Messiah
they all speak of something much greater, much higher
than this one day a year set aside to rejoice
to sing carols, send cards and do things of one's choice
For they suddenly speak not of worldly tradition
but of Son of God rescuing son of sedition

The second poem is one that I wrote to put in a little card that I made.


May we all be wise and come to the One Who was born into this world to pay the price for our sins. 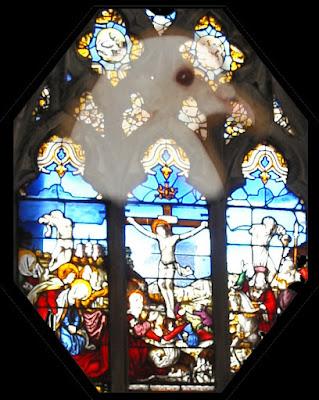 ' For my Father’s will is that everyone who looks to the Son and believes in him shall have eternal life, and I will raise them up at the last day.'
John ch. 6 v.40
Posted by Brenda at 11:10 22 comments: Links to this post

Who do we believe in

A couple of weeks ago I did not go to the church gathering that I am attending, I did not feel like going and was going through a bit of a trial with my bones, and I began to think  'Maybe I will come out of this church gathering and see if I can find a Pentecostal one nearby.'  I believe the reason I was thinking this was that I have seen a lack of the spiritual gifts operating in the churches, including the gifts of healing and miracles. Very soon after, I had a dream in which these words were spoken to me 'Do not say that you will come out', but not only were these words spoken to me, a picture of the words were in front of my eyes in the dream.  I knew it was speaking about me not coming out of the church at this moment, as God warns us in dreams.


Last Saturday I was not only suffering from pain in my bones, as I had done a lot of walking on the Thursday and Friday that week, but I stepped on something in the mat in the en suite in our bedroom that felt like a needle, and I could not walk on that foot.  My carnal mind told me that there was no way that I could go to church the next morning, and yet when I sought the Lord about it He had me open to Psalm 122 twice. This is a Psalm that has always spoken to me about going to a church gathering when I have asked about it, so I prayed to the Lord that if I was meant to go then He would enable me to.
I awoke the next morning with no problem in my foot and feeling well able to go to the church gathering, and wanting to do so.

I noticed on my bedside cabinet as I awoke that my husband had cleaned the bedroom furniture the day before because I was feeling weak.  He had jiggled the lamp and other things that I had there and one of the things that he had moved around was a little picture of a rose and a scripture on it. This was looking straight at me as I awoke. 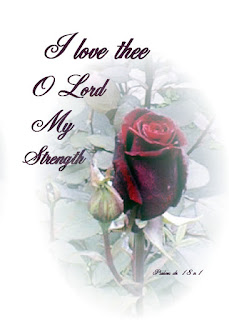 This is the picture that I have on my bedside cabinet, it is in a frame on there.  I knew immediately that I was to go to church, it had been enabled through His strength in my weakness, and it was meant to be.
This incident made me realize once again that the Word spoken to us will prove true if we just trust in the Lord, knowing that all things are possible with Him.

Fear and doubt can actually prevent us from trusting in what the Lord is saying, and cause us to trust in what the enemy is putting within our carnal minds. We must not forget that once we are born again and have become a child of God then we have the mind of Christ.

1 Corinthians ch. 2 vs. 14-16 states:-
But the natural man does not receive the things of the Spirit of God, for they are foolishness to him; nor can he know them, because they are spiritually discerned.  But he who is spiritual judges all things, yet he himself is rightly judged by no one.   For “who has known the mind of the Lord that he may instruct Him?” But we have the mind of Christ.'
This is absolutely true, and I finish this post with a prayer that I wrote many years ago and which is still my prayer today:-


It broke all the rules
Lord make me like Mary, so quick to believe

Yes make me like Mary that I might receive
with a heart and a mind that are meek
unlike Zechariah who would not believe
and for months was unable to speak
Lord make me like Joseph who thinking it right
would quietly put Mary away
but when visited by an angel one night
straightway at her side he did stay
Yes make me like Joseph who simply obeyed
when instructed that night in a dream
to do what You ask Lord and not be afraid
how to others it might make me seem
Lord make me like Jesus - a babe in a womb
awaiting His birth in this world
though knowing one day He'd be sealed in that tomb
was obedient as God's plan unfurled
Yes make me like Jesus - a true child of God
Who came into this world to serve
and was born in a manger, where animals trod
not the palace that He did deserve
For God is not ordered by man's plan or choice
and it broke on that day all the rules
when He spoke to a maiden through angel's voice
in spite of religion and wisdom of fools
No God was not ordered by man's plan or choice
when He sent You Lord Jesus to earth
and through riddle and parable echoes His voice
as He brings His great Kingdom to birth.
Posted by Brenda at 08:08 31 comments: Links to this post