Coming through the wilderness

Lord You walk with me in my wilderness
I feel Your presence at my side
Lord You talk with me in my wilderness
Your loving voice has been my guide
When I am lost You take my hand
You are my shelter from the wind and hail
My friend and neighbour in a hostile land
You keep me on the narrow trail
There is a season for all things- a time and purpose too
For God has fashioned every day that we must journey through
There's a season to be strong and there's a season to be weak
There's a time to give opinion, there's a time we should not speak
And whether things be good or bad all things are passing by
For this world is a testing place for perfecting you and I
And when we've learnt within this life to be as we should be
This too will pass with all its strife and we shall be set free
Posted by Brenda at 03:10 2 comments: 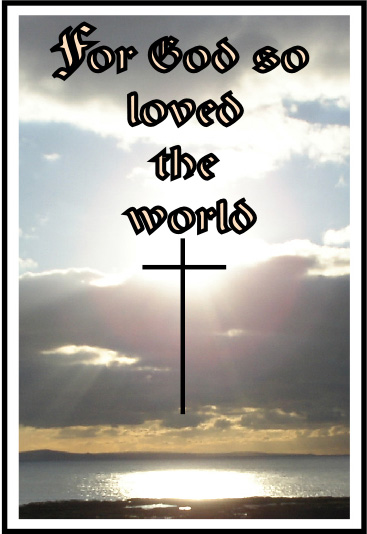 The power of love


I look around the world

Salvation is found in no one else, for there is no other name under heaven given to men by which we must be saved        Acts ch.4 v.12

I'm on a cloud

I'm on a cloud above the world, a cauldron boils below
I see beneath me on God's earth a tale of dread and woe
of how so very long ago a man was formed from clay
and given life from God above, but sin led him astray
He questioned what the Father said and lost eternal life
and now he struggles in this world in self destructive strife

He tries to shape his future by the power of his own hand
His cry 'I'm my own master'... it echoes through the land
but while this proud confession is still upon his breath
the worldly life for which he strives has now become a death
He stumbles in the darkness, his eyes have gone quite blind
'What have I done?' he questions 'Ive lost my peace of mind'

But wait, I look towards the east... a ray of hope I see
a second adam sent to earth to set all mankind free
'Put down your heavy burdens' this Saviour says with love
'Come drink the waters of new life sent down from God above
I bring salvation to the world, your sins have all been pardoned
Come learn of me the Father's ways... don't let your hearts be hardened'