The Word of God or the doctrine of man?

﻿
Last night I had a dream.  In the dream I was above ground looking down onto the back of the  house that I was brought up in.  It was as if I was hovering above the back garden of that house.  I could see a man talking to a group of people.  It was like a group of people in a lecture, and the man speaking was like the lecturer.
As I gazed upon the scene, this man suddenly put some birds in bags and started to beat them.  I could not believe that he was trying to kill these poor birds, and felt extremely sad.  The lecture ended and the people went away.  Then I was in the garden, holding the bags and  looking at the poor birds inside them .  I realized that they were still alive, but struggling.  I was afraid to take them out of the bag in case I should find broken wings or legs that would restrict the birds from flying.
I looked to the back door of the house and cried 'Mam, mam...... help', hoping that my mother would come and help these poor creatures, but my mother did not appear at the door.  It was as if I was in two time zones, the past and the present, as if the lecture and the damage being done to the birds by the lecturer was the present, but the looking to my mother for help was looking to the past.
Then it was as if I was carried from the past to the future with the bags of injured birds in my hands.  I called to my husband, and showed him the injured birds in the bag.  I told him that I was concerned that they would not be able to fly and asked for his help.
I awoke and almost immediately the meaning of the dream began to form in my mind.﻿


Calling for my mother represents calling on the help of those of the earth that I would have turned to before I was born again and became part of the church.  Calling for my husband represents prayer to the Lord for help, as the church represents the bride of Christ.  So as part of the church (the bride of Christ) I pray to the Lord (the husband of the bride) for help in the Spiritual situation of those who are in the kingdom of Heaven (those represented in my dream by the birds), who are being silenced  (represented by the beating and putting in bags) by man's doctrine (represented by the lecture that the man who was silencing them was giving).
The whole of the dream represents what I believe is happening now in the church, as was foretold by Jesus in Matthew ch. 24, that there  will be false teachers and prophets.

Isaiah ch. 29 v. 13 reads:-
And the Lord said:
“Because this people draw near with their mouth
and honor me with their lips,
while their hearts are far from me,and their fear of me is a commandment taught by men,

Much of what was happening in the Israel of old is in danger of happening in the church  today.  We have to be taught by God and not by man, and the only way that is done is through the Holy Spirit operating within the church.   It is a spiritual warfare that we are in, and I believe the beating and silencing of the birds in my dream represents the  endeavouring by the spiritual enemy to stop God's Spirit operating through born again believers doing what they are called to do when they gather together.  2 Peter ch. 2 vs. 1 and 2 says:-
'But false prophets also arose among the people, just as there will be false teachers among you, who will secretly bring in destructive heresies, even denying the Master who bought them, bringing upon themselves swift destruction.  And many will follow their sensuality, and because of them the way of truth will be blasphemed.'
There is only One voice we must listen to and One Word we must act upon in order to grow strong in the Lord and in faith.
Romans ch. 10 v. 17 reads:- 'So faith comes from hearing, and hearing by the Word of God'.

A song that I wrote many years ago once again comes to mind, based on this scripture from the book of Isaiah. 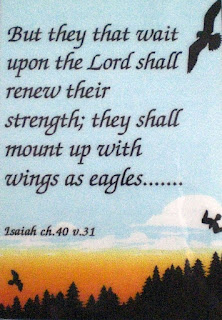 
We, the church, must not allow false teachers with doctrines of men to rob us of what God has for us in Christ Jesus.
Posted by Brenda at 10:03 41 comments: Links to this post