Several things have happened recently that have spoken to me spiritually of prayer and faith.

One night I had a dream in which I received three certificates after passing three exams necessary to become a barrister.   A barrister is an advocate, someone who puts a case on someone's behalf.  For some time I have felt very moved to intercessory prayer.  Before coming to live here I was always involved in prayer groups, sometimes only with one person, but always with Spiritually passionate believers.

A few days later I bought some dandelion tea   I like herbal teas and had never tried dandelion tea, so I went into town and bought some.  A new visitor called Sandi came over to my blog a couple of days later and I went over to view her blog.  I could not believe it!  Her blog is called 'Dandelion tea' and the post for that day was called 'Pray' and just had this verse in it.'

'If my people who are called by my name humble themselves, and pray and seek my face and turn from their wicked ways, then I will hear from heaven and will forgive their sin and heal their land.'


2 Chronicles 7:14
I really believe that the Lord is showing me the need for His people to pray at this time.


Then, shortly after, I was with my friend in the city where we go to distribute our leaflets.  I needed to go to the post office which was above Smith's book shop.  We entered the bookshop and came to where the steps and escalator led up to the post office. 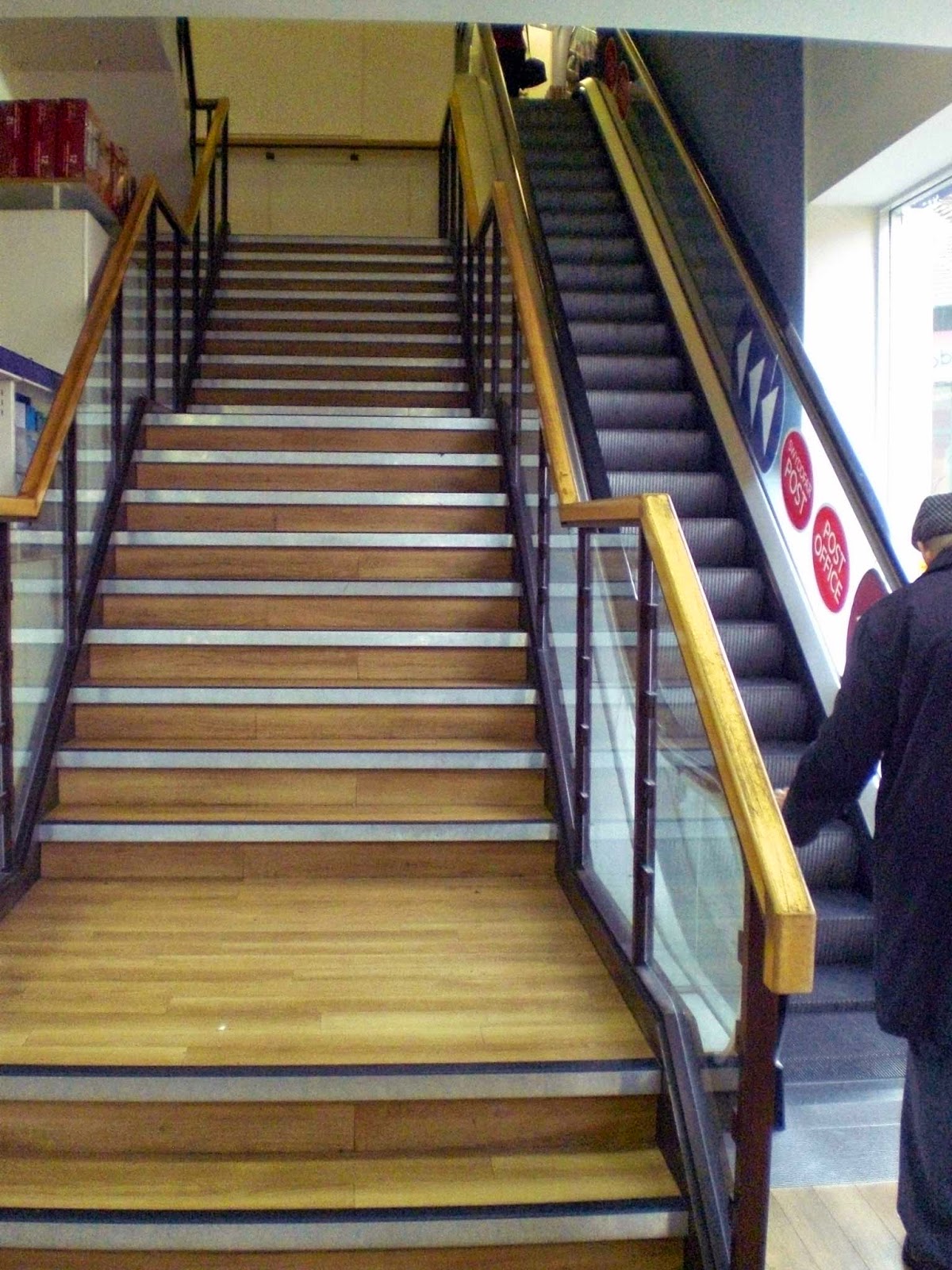 A young man was limping to the escalator.  I said to my friend 'I don't think I can walk up the steps (thinking of my joint pain that has come upon me ever since I received the word from Psalm 103 about healing from all diseases, which I believe the Lord spoke to me regarding something I have had in my body for over twenty years).  So we took the escalator up to the post office. Some time later, we went into the Debenhams store to use the Ladies washroom.  We came to the escalator to find that only the one coming down was working.  The one going up to the first floor, where the ladies washroom was, had stopped working.  I felt straight away that there was something spiritual to this as it came to me that I had chosen not to go up the stairs in the bookshop, and had used the escalator, yet this escalator was not working and was just as a normal staircase would be. 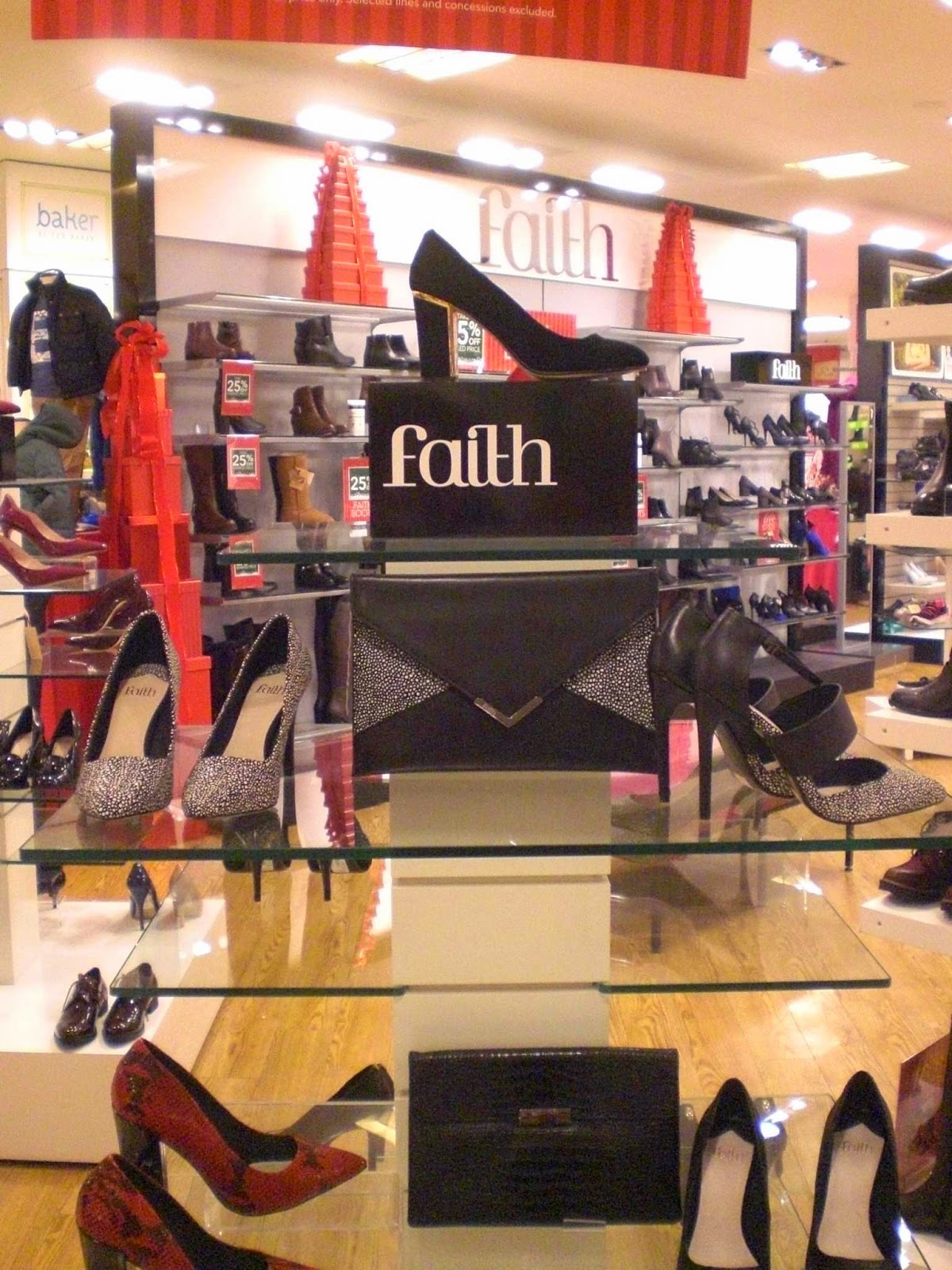 I climbed the stairs experiencing some pain in my joints.  However, when we reached the first floor, right in front of me was a stand with the word 'faith' written above it.  I could hardly believe what I was seeing, and knew that I was being told something but could not get the full meaning of what was being said to me. When we came back to go down to the ground floor somebody had placed a black shoe right in front of the word 'faith'. 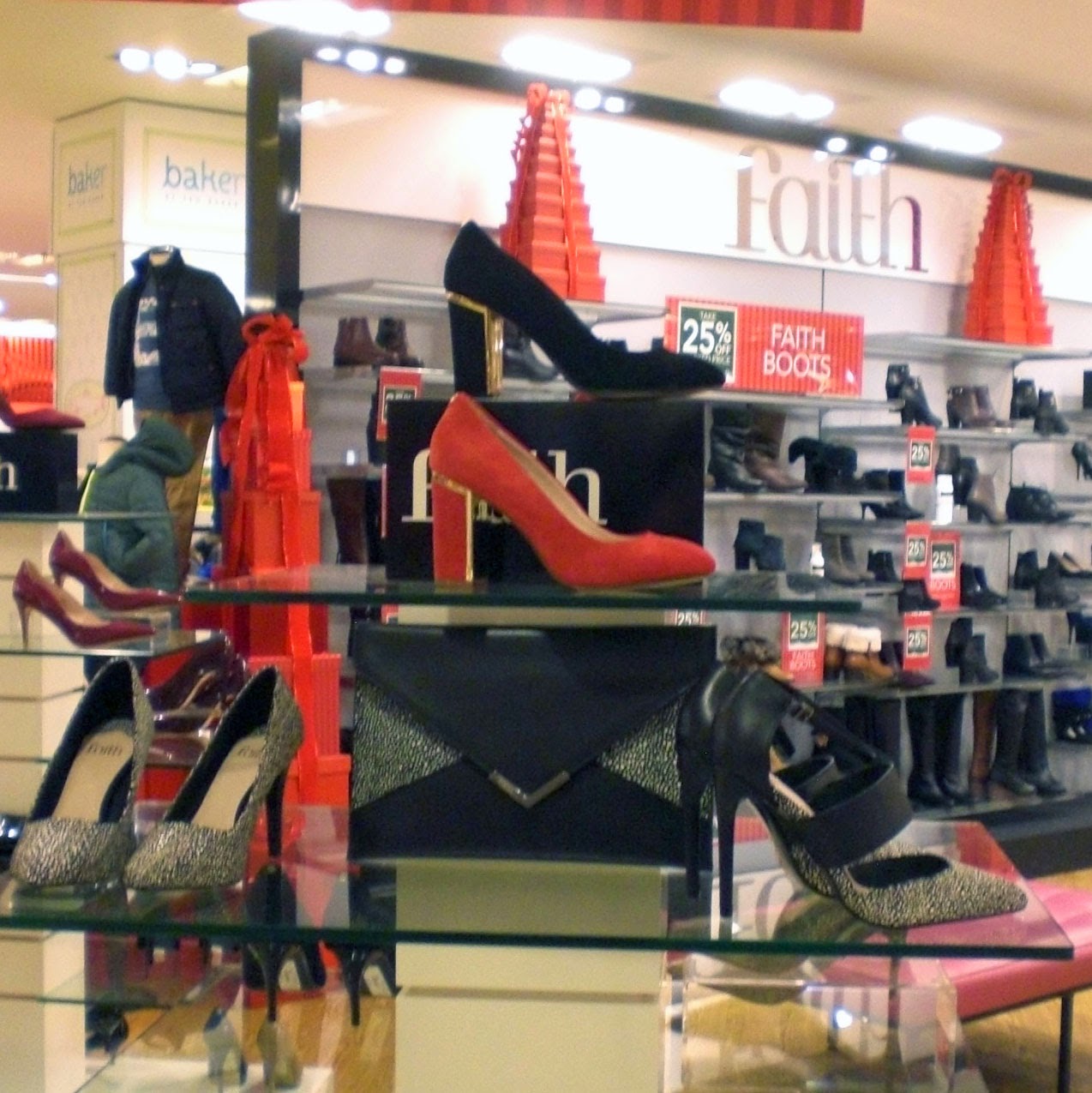 The strange thing was that in order to write this post I had to go back to the shop and take these pictures, which I did last Friday.  This time there was a red shoe in front of the word 'faith', whereas the week before there had been a black shoe placed in front of the word 'faith'.  I felt the red shoe stood for a  warning and I believe I know what the warning is about and  what the Lord has been trying to point out to me.

I have been shown that the Lord will heal me and I assumed that I had the faith to believe that.  However, I believe that I have been shown that there is a great danger of me allowing the enemy to rob me of that faith by walking according to what my carnal mind is telling me and allowing it to block out what the Lord's word is telling me, and that is what I believe the red shoe hiding the word 'faith' is representing.

If I go back to when I was going to the post office, my mind was focusing on the lame man and the difficulty I would have walking up the steps.  There was actually a thought in my mind of me being like that man in the future.  Yet who was putting these thoughts into my mind? It was not God, for I have had the promise of healing.  This makes me more aware of how important it is to take every thought captive and bring it into obedience to Christ (who is the Word of God ).  The enemy is very cunning and I believe he tries to cause doubt in our minds when God has given us a promise through the rhema word, which He has with me.  James ch. 1 vs. 6-8 states :- '.  But he should ask in faith, not doubting, for the one who doubts is like a wave of the sea that is driven and tossed about by the wind.  For that person must not suppose that he will receive anything from the Lord,   since he is a man of two minds, unstable in all his ways.'

I immediately took those deceiving thoughts captive and brought them into obedience to Christ, the Word of God contained in my promise.  Something else happened recently that reminded me of the surety of the word of God in our lives when we truly believe it. 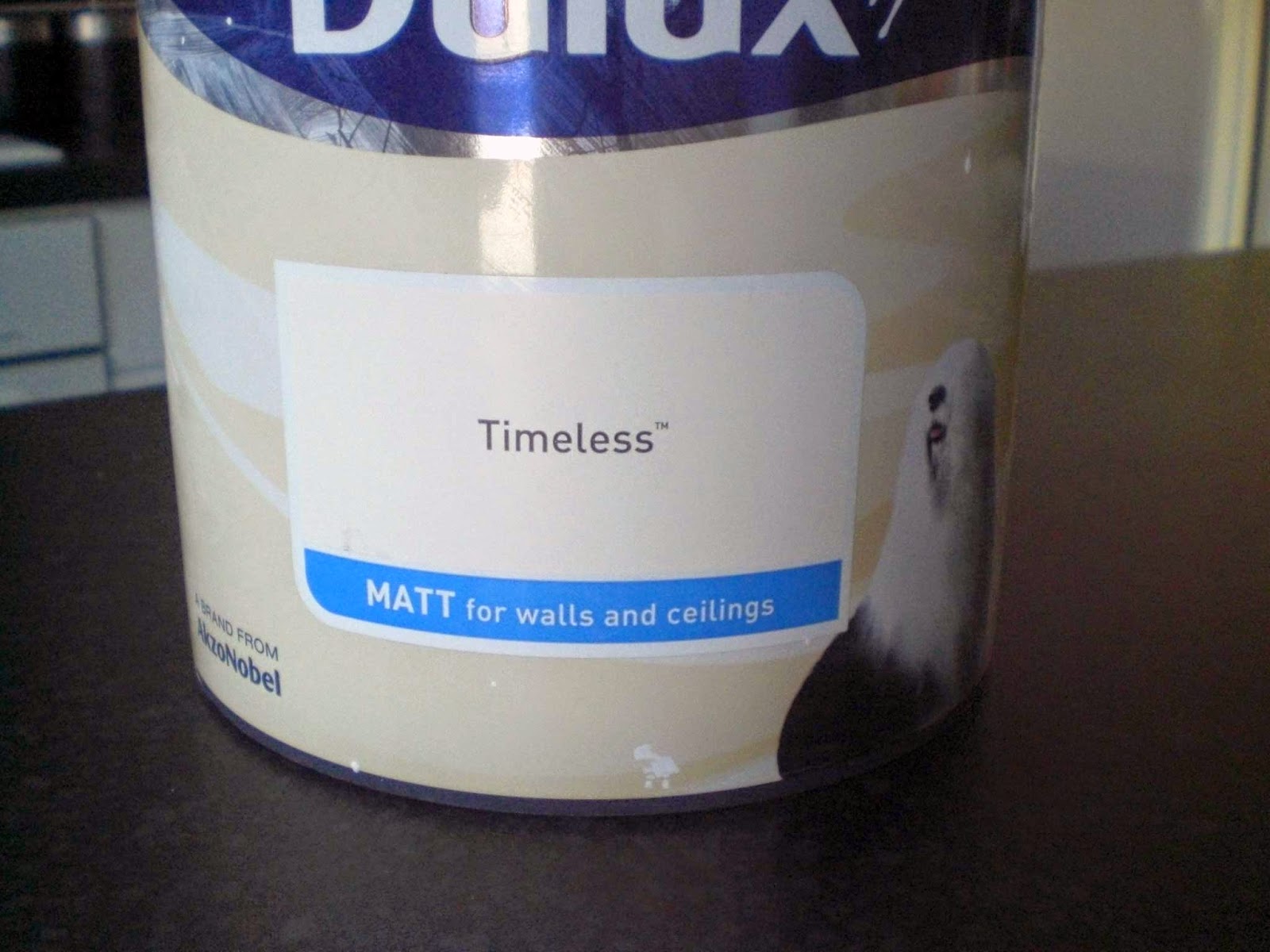 We wanted to re paint our kitchen walls and when my husband looked in the garage to see what tins of paint we had there he came across a matt emulsion, the colour of which was called 'Timeless'.  We decided that would be just right for the kitchen walls. 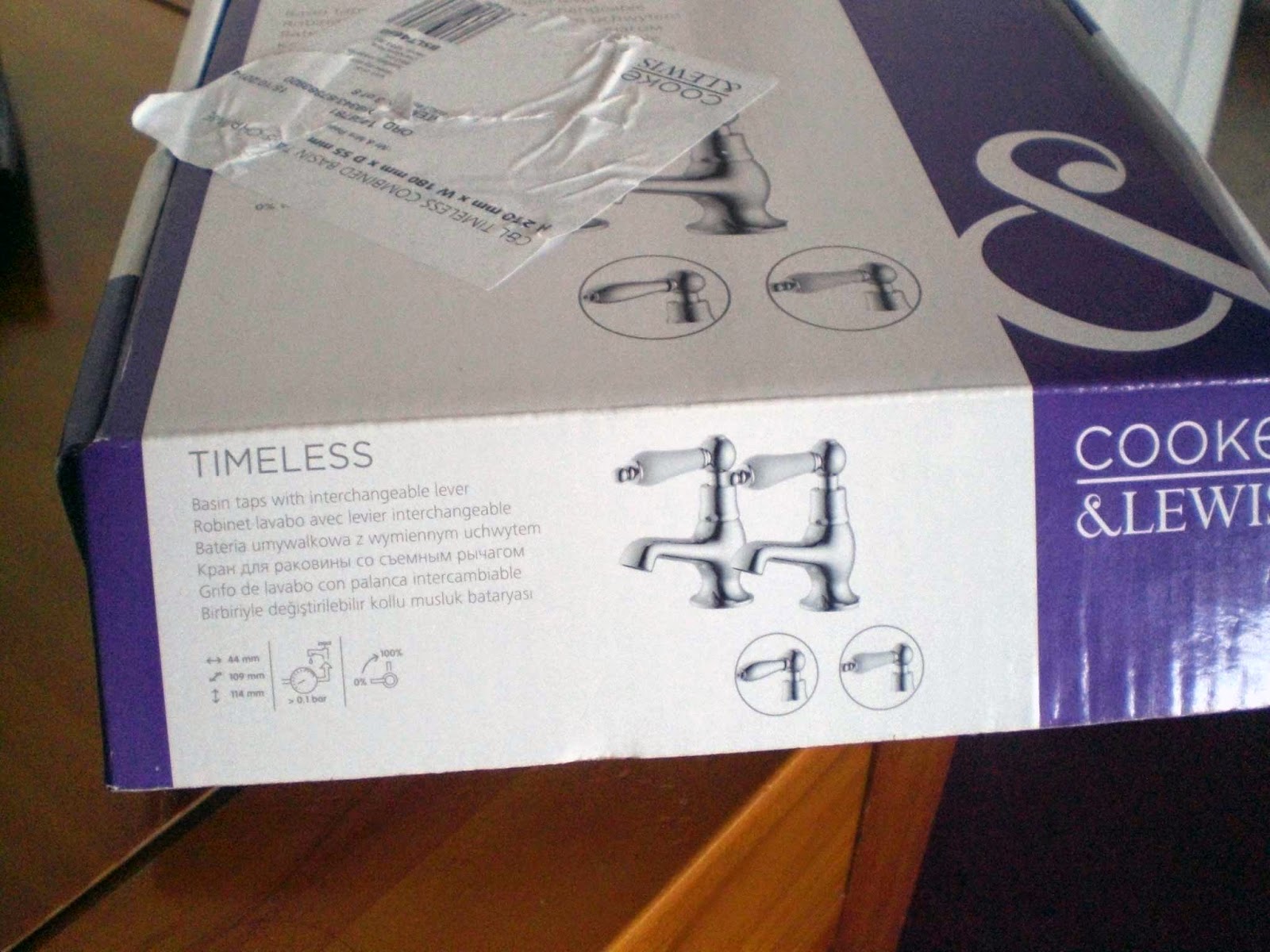 We are also thinking of changing the bathroom furniture and saw a nice wash basin and toilet, so we bought them to store in the house until we decided which shower cubicle we wanted.  We also picked some wash basin taps to match.  When I looked at the the delivery note to check the items, I noticed that the taps were also called 'Timeless'.  I thought this was strange as the paint and the taps had no manufacturer's connection at all.


Shortly after, I was in a Tesco store and picked up their free magazine.  When I got home I had a brief read of it and came across an article called 'Right here right now'.  It said underneath the heading:- 'Learning to be in the moment can improve nearly every area of your life,  here's how to reap the benefits of mindfulness.'  I realized as I read a bit more that it was an article about some kind of meditation, which I did not carry on reading but which brought to my mind how the Lord tells us to take no thought for tomorrow, that our times are in His hands, and I would encourage everyone who has been given that rhema word to walk in faith, not leaning on your own understanding or going by what you see.  We must not let the enemy rob us of that word which is 'timeless', the same today, yesterday and forever.  That word of God is like water that runs from timeless taps.
With the mind of Christ we have peace, and all the promises of God are 'yes' in Him.

After writing this post yesterday I was lying in bed this morning and it came into my mind that Jesus said in Mark ch. 9 v.23 to the man who had doubt whether Jesus could heal his son 'Everything is possible to one who has faith.” So I said to the Lord the same words that the boy's father had said in verse 24:-  'I do believe, help my unbelief'.


Then I started to sing to myself a little song that came into my mind.:-