The other day I was watching 'Songs of Praise' on the television and Glen Campbell was on it.  He spoke of his life, I think he is 84 now, and then sang a song which he and another person had written called ' A better place awaits you'll see'  It was absolutely beautiful and spoke of how the Lord's presence had been in his life, bringing him happiness, and what awaited those who trust in Him.  It reminded me of a poem I had written some time ago and I would like to share it as an ' amen ' to what Glen had sung. 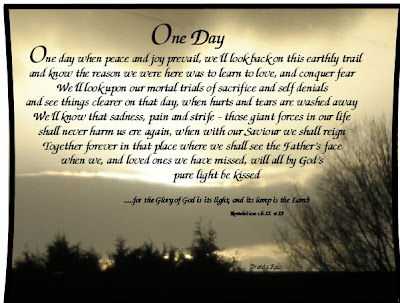 Just checking back to see if you have posted again.I’ve been following and enjoying your blog for a while now and would like to invite you to visit and perhaps follow me back. Sorry I took so long for the invitation