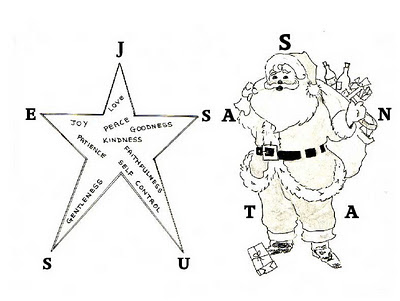 He's trying to take Your place Lord, he's been at it for many years
He says 'I come with gifts for all, I'll wipe away your tears'
He wears a robe of scarlet and a smile is on his face
But no one would guess the heartache he will bring to many a place
He shows himself late November, in each home he will surely appear
He demonstrates toys on the 'tele' and says 'Christmas is nearly here'
Each year they get more expensive, a computer or chemistry set
He slowly puts pressure on parents who are tempted to go into debt
All children are told 'Santa's coming!  He's got a great bag on his back'
But nobody seems to be bothered that daddy has just had the sack
'I'll start with the youngest children' says the 'Tempter' in disguise
Never mind if mummy is crying as to make ends meet she tries
He's trying to take Your place Lord as he sits inside every store
And shouts a loud 'Merry Christmas' to each person that comes through the door
But the spirit he drinks is not holy, and the hands he holds out do not heal
The words that he speaks bring no wisdom, and the love that he shows is not real
How strange he should come at Christmas, and offering gifts like You do
And he's known to many as 'father' while a baby child represents You
But for me there is only one Father and of Him only will I sing
While His Son is no longer a baby, He's a two thousand year old king!
Yes he's trying to take Your place Lord, though he knows that his time is short
But the presents he brings can never compare to the wonderful gift You have brought
For whatever disguise he may come in and whatever good thing he might bring
The one thing he never will offer is salvation through JESUS the king
So never a red robed Santa will ever adorn my front door
It's the blood of my Lord on my doorpost brings me peace and goodwill evermore

'They have lyre and harp, timbrel and flute and wine at their feasts, but they do not regard the deeds of the Lord, or see the work of His hands.'      Isaiah ch.5 v.12


WHERE WILL YOU BE LORD

Where will You be Lord this Christmas
as far as the world is concerned
Out of all that You've taught us these two thousand years
is there anything anyone's learned
Do they know that your judgement is coming to all
do they know there's an end to Your grace
That Your Spirit will not strive forever with man
that there's always an end to a race?
Can't they see all the signs of Your coming
how Your truths are all being unfurled
Of the earthquakes, the wars and disasters
and the lawlessness gripping this world?
Have we chosen to go each our own foolish way
do we all sing our own selfish song
Are we doing what's right in our own blinded eyes
even though we know You say it's wrong?
Has the world turned its back on You Jesus
do they think the cross lies in the past
Can't they see it was just the beginning
that the end's spinning close very fast
Yes where will you be Lord this Christmas
in a world full of darkness and sin
Will Your light be shut out of so many homes
while a santa and tinsel come in?
Will they close their ears to Your knocking
while You stand at the door one more time
And will they still be stood at the chimney
when the clock makes its final chime?

.....when the Son of man shall come in His glory, and all th holy angels with Him, then shall He sit upon the throne of His glory;  And before Him shall be gathered all nations and He shall separate them one from another, as a shepherd divides his sheep from the goats     Matthew 25 vs.31,32

..... for nation shall rise against nation, and kingdom against kingdom; and there shall be famines, and pestilence and earthquakes, in divers places; all these are the beginning of sorrows     Matthew 24, vs.7,8

..... and the timnes of this ignorance God winked at; but now commands all men everywhere to repent;  Because He has appointed a day, in the which He will judge the world in righteouosness by that man whom He has ordained;  whereof He has given assurance to allo men, in that He has raesed Him from the dead.     Acts 17 vsl. 30,31

While shepherds watched their flocks by night God's plan on Earth began
It was to send His precious Son to rescue sinful man
God made His form like humankind, His loss to be our gain
And made Him know rejection, to feel our hurt and pain
He suffered loss and loneliness from those who showed no love
And even felt forsaken by His Father from above
But all was for a purpose, to show to all manking
If we keep our eyes on Jesus Christ God's mercy we shall find
Come all who are heavy laden, come now and behold your king
Come all who are sad and lonely, It's time to rejoice and sing
Come all who are weak and weary, lift up your heads and see
Come all who are bound in fetters, this Saviour can set you free
This Jesus who once was rejected must now be received by all
For the Father has granted eternal life to those who will answer His call
He comes to give life in abundance, a bearer of burdens is He
He's been born in a world of rejection and strife
He's been born to bring pardon, born to bring life

As I walked into the library to come onto the internet to write this post on my blog, there was a lady carrying a dummy santa out of the main room because a little child did not like it and was crying.  '  It's gone now' she said to the child.  Do we really recognize the wiles of SATAN (which rearranged spells SANTA), and have we really noticed how Jesus is being replaced at this time of year.
Posted by Brenda at 06:59