Our little cat, Fluffy was very ill.  I had prayed for her a few times before when she had been younger and the Lord had made her well on those occasions.  This time she had been steadily losing weight and I had resorted to going to the vet when the Lord appeared not to answer my prayers.  The vet said that the trouble was in her kidneys and it was due to her age.  I was afraid of losing her and let the vet give her steroids.  For a time she appeared to pick up, and we thought she was going to get better, but then she lost the use of her back legs and we had to take her to the vets again.  I wanted Fluffy to be made well but I had a strong feeling that the vet would advise putting her to sleep, something which neither my husband nor myself wanted to face.  We love our cats very much, as any animal lover will understand.  On the way to the vets Fluffy was licking my hand and I almost felt as if she was telling me that everything would be alright, as if in some strange way she was trying to comfort me.  When we arrived at the vets I could not go in and so my husband took Fluffy in alone, while I sat in the car.  Within a short time he came out and said that the vet had said that there was nothing he could do and it would be cruel not to put her to sleep.  It was a terrible moment for both of us and neither of us wanted to give the vet permission to do it, but we both knew that we could not leave her in the state she was in.  My husband kept saying 'What am I to tell him?'.  I finally said yes and my husband came out some time later with Fluffy's little body, and we took her home to bury her in the garden.  As soon as I saw her I felt terribly guilty, I felt as if I had killed her and I kept crying.  It went on for days and I could get no peace.  I kept praying and asking the Lord to give me peace over it, asking Him why He had not healed her and to show me whether I had done right or wrong.  Finally the Lord answered me in a song and I believe He showed me through various incidents that even if I had not taken her to the vets at all, even without the steroids, that Fluffy would have died naturally on the same day that the vet put her to sleep.  It was just her time to die.
I have learned through that incident, and many other incidents, that the Lord knows that we are flesh, and understands our heart like no one else could, and that everything that I do, and the reason I do it, is known to God.
This is the song that eventually helped to bring me peace in the situation, in which I asked questions of the Lord and also, I believe, the Lord answered those questions.

Death has no sting

Now I recall, Your voice it was speaking
And it was saying 'This just has to be
There is a time of ashes to ashes
When the spirit of life must return unto me' 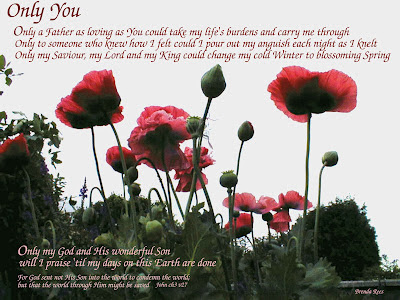 So sorry to hear of your loss Brenda, I'm a cat-lover myself, and it's never easy to go through what you've been through.

Lovely poem by the way. Thanks for posting.