There are many ways that God can speak to us in our christian walk, and I am sure that each one of us comes to recognize His voice in our lives as we grow in our Lord Jesus.  The following are  testimonies of  where I believe I was being spoken to by the Holy Spirit on two separate occasions.


The stain
There was a large stain on my skirt.  It had been there for some time and no matter what I did I could not get it off.  I had tried stain removers of various kinds but it just would not shift.  It was a dark blue stain on a maroon skirt, a skirt which I liked very much, and I wondered what else I could do to hide it.

At that time I had not been able to forgive myself for something I had done in my past, even though I had since become a christian, being told that if I repented of past sins I would be forgiven by God.  My mind could not blank out this thing that I had done and it kept causing me hurt and regret.  Looking at the skirt, I realized, in a sense, that my past sin was like that stain, and thought 'I can never take that sin out of my life.'  Just like the stain on the skirt it would always be with me.  Then it occurred to me that, instead of trying to remove the stain I should see if I could cover it over.  I had a variety of fabric paints and could paint the blue stain maroon, the same colour as the skirt, so that it would not be visible.


At that point I had a very clear revelation of Gods grace in the crucifiction. My past sins would always be there, in my past.   I could never say that I had not committed sins.   However, to God they were 'invisible' because of the blood of His sinless Son acting as a covering over them.   Just as the fabric paint would act as a covering over the stain on my skirt,   and the blood on the doorposts had long ago prevented the 'destroyer' from harming the Israelites, so too would the blood of Jesus protect me from Gods wrath.  This revelation to me finally brought me peace.  There would always be sadness in my heart for what I had done, but God had forgiven me.  There was no need for guilt. 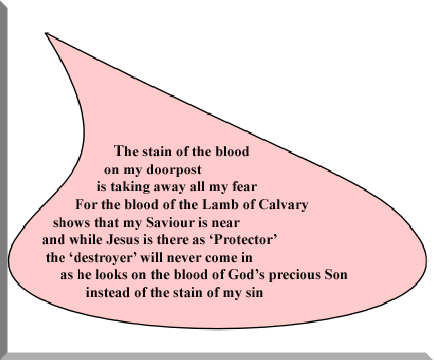 Reflections on a puzzle
One Sunday, as I was walking home from a church I had attended, I came across a lot of jigsaw pieces scattered on the pavement.  It had been raining and they were wet.  The pastor at the church had been speaking about disunity amongst God's people, and while I was walking through the town I was reflecting on this and wondering why it was so.  These jigsaw pieces, separated one from another and scattered all over the ground, seemed to be echoing what the pastor had been saying, and I felt the Lord was trying to tell me something.  I gathered all the pieces up and placed them in my bag.

When I arrived home I proceeded to piece them together to see what the picture might be, but each piece began to separate into two parts because the rain had neutralized the glue that was sticking the picture to the backing card.  I started to have understanding of what I believed the Lord was trying to reveal to me.  If I pieced the backing card together I would have no picture.  If I pieced some of the backing card together with some of the picture pieces they would join together because they were the same shapes but I would only have part of the picture.  If, on the other hand, I pieced all the upper pieces together, I would have the whole picture.  I could see a parallel in these jigsaw pieces with God's people.  The blank backing card represented the old creation of the flesh, which was dead in sins, and its carnal mind, while the top layer with the picture on represented the new creation in Christ, and it's spiritual mind.   Old and new mixed together could only bring disunity, because the carnal mind is at enmity with God, and the things of the Spirit are foolishness to it.

The element that had separated the two parts of the jigsaw pieces was water and only the spiritual water that comes down from Heaven, the word of God, can separate the old man from the new creation which God is forming in us through Christ Jesus.  As each of us allows the Holy Spirit to renew our mind in Christ we will grow up into the united body of Christ.

The first book of Corinthians ch.15 v.22 says that 'as in Adam all die, even so in Christ shall all be made alive'.   God had shown me through the pastor's words that there was disunity in the church, but it was only through the jigsaw pieces and the revelation to me through them could I have understanding of why there was disunity.  This incident taught me how vital it is to be alert to the ways in which God is able to reveal something to us, if it ties in with His word, and how it is for our benefit that we act on that revelation so that we might be changed into our Saviour's image to be able to soar with Him in the Spirit. 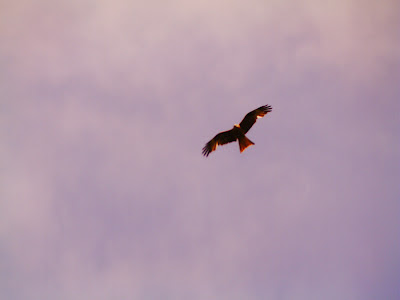 To fly without wings

Wonderful post Brenda. Yes, I believe God 'speaks' to us all in many ways; some that are easy to understand and others that might seem surreal if you try to explain them. I too have past sin that I am ashamed of and which I feel pulls me down; but slowly and surely I feel that God is cleaning me and absolving me of this guilt and sin; without Him we would be lost in so many different ways.

Love the poem at the end by the way; that does take talent to write poetry, really good poetry.

Hi Tim,
thankyou for your kind comment, I notice you are so encouraging to people when you comment on their posts. I think you would be brilliant at social work with people who need uplifting.

I love how you make connections!

Until the day our Lord takes us home we will be suffering from the sins of our past, the consequences. Praise God Christians are forgiven and their sins are totally forgotten by Him, but that surly doesn't mean that we don't suffer for the wrong we did.

Thanks for stopping by my blog and leaving a beautiful prayer for Lucy. God has gifted you with the beauty and power of words. I would like to encourage you to stop by Lucy's blog and leave her mom Kate some encouragement.

Hi Child of God
Thankyou for your encouraging comment. I love interacting with people and sharing my testimonies of our all powerful, loving God and His Son. I have just left a message with Kate that I hope will encourage her regarding Lucy.
God bless you.

Hi Child of God,
thankyou for your kind comment. I have just left a comment on Kate's blog, hope it will encourage her.
God bless.

Hi Tim, I think there's something wrong with my blog comments system, it doesn't seem to be publishing my replies. Thanks for your kind comment. Will try another post soon and see if the comments box is looking the same

this is a refreshing blog site and I am so glad we stumbled upon each other.... May our Lord Jesus bless you most abundantly today in a special way!

Hi Marijo,
thankyou for your kind comment, I am so glad I came across your blog as well. Now that I have discovered blog train I shall interact more. May the Lord bless you too, and your pussycats.