In a previous house we lived in we were having cavity wall insulation put in, there were two men doing the job and I had made them both a cup of coffee. They finished the drink and left the cups on the step outside the French doors.  In the meantime my husband was questioning one of the workmen on an issue to do with why a certain area of the cavity wall was not being treated. The man gave my husband an explanation and then carried on his work.  My husband did not quite understand what the man had said and so questioned him further.  The man said 'You don't believe me do you?' and proceeded to explain more fully why the particular area of the wall was not being treated.  Finally, when my husband had more information, and could see the whole picture, he was satisfied that the man was right in what he was saying.  Until he had all the information my husband had been making a judgment with the small amount of knowledge that he had on the subject.  Lack of understanding had caused suspicion.

Soon after, something else happened which reaffirmed this train of thought.  I had brought the coffee cups in from the doorstep to wash them.  I noticed that there was a crack around the base of one of the cups.  'Throw it out' said my husband.  'There's another one of those mugs that has a crack in it in the cupboard.'  I said, 'I'll throw that one out too.'  This I endeavoured to do.

As I threw the two cups into the kitchen bin I suddenly had a thought in my mind. What if one of the men wanted to throw something into the bin and spotted the two cups there, they could think that I had thrown the two cups that they had used into the bin simply because they had drunk from them, for all the mugs were the same. What an awful atmosphere that would create!

One part of my mind was telling me not to be so absurd, but the other part was pointing out the fact that my husband's limited knowledge had caused him to be suspicious about the reason the workmen were not insulating one particular area of the house, and that the same situation could happen with the mugs when they had not heard our conversation regarding them. So I decided that the easiest way of avoiding misunderstanding was to put the cups inside a carrier bag inside the kitchen bin.  I had been made aware of how easy it is to misjudge a situation by what we see and think we know, when we do not see the whole picture. 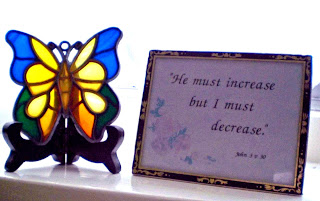 It is God alone Who sees all, and these kind of trials are given us so that we might learn to be patient and not to judge by the small amount we think we know by what we see.

So much wisdom in this, Brenda!

Hi Sandi,
I love the wisdom that the Lord enables us to have through the situations He brings into our lives. It is so easy for us to judge a person by the small amount we see of something they do or say. God bless Sandi, and keep safe.

Dear Brenda,
It might have been a good idea had the workmen first explained their intention with why a section of the wall will remain untreated, before commencing work. Like that, your husband may not have had his suspicions aroused.
As for the cracked cups, I probably would have held on to them until the job was complete and the workmen had left. But again, that's me.
Wishing you all God blessings.

Hi Frank,
yes there are various things the workmen could have done, but I find that I learn things from all these strange happenings. They are like parables to teach me things. God bless you and Alex.

Very true, Brenda! It is so easy to misjudge based on incomplete information. I think that is one of the reasons why Jesus warned against "idle words." Gossip ends up becoming slander if we add our suppositions to what little is known about a situation. God bless.

that's right Laurie,
our eyes are not the eyes of God, and it is better to say nothing about what we think we know when we are not sure about it. God bless.

Thank God for His discernment that you were able to apply regarding the situation with the cups and that of your husband's talk with the men. However, I think it's great for your husband to ask because he didn't know. The men shouldn't be hurt when asked because he wanted to be clear with the work he asked them to do. So, it would be wrong for your husband to be suspicious of them but it is also wrong for the men to be angry when your husband just wanted clarification.
In everything, it's true. We must not judge based on what our eyes see. I often remind myself and my family that the unseen battle is real and that we must always pray for God's protection, discernment, and guidance as we battle each day starting with ourselves when we make decisions. God bless sister Brenda. Your post always lifts up my faith.

Hi Rosel,
yes you are right in all you say. We are told that we must go to someone if we have something against them, but we must also not judge anyone. My husband has always been very 'fussy' in all things as he was in his engineering work. Even when we have known someone for years we can still see something in them that we did not think they would have. None of us are perfect and God's love is far above ours. God bless you in these testing times Rosel, my sister in the Lord.

Hi Brenda,
To God is all wisdom -- His ways and thoughts are higher than ours, and we cannot comprehend it. May we be discerning in knowing when to speak, and when to keep silent.
God bless you,
Laurie

Hi Laurie, yes we really need to think about what we say before we actually speak to someone,especially when answering a person. There is a vast difference between responding and retaliating. God bless you Laurie.

Hi Victor,
I love the way that many experiences in my life, probably all, are placed there by God to teach me His ways. God bless.

Hi Brenda,
Yes, may we be swift to hear and slow to speak, carefully considering the impact of our words. God bless you,
Laurie

Hi Laurie,
yes so right, bringing every thought into obedience to the Word of God before we speak. God bless.

Hi Brenda,
Especially as our Lord's return approaches, may we be ever mindful to follow His Word.
Blessings to you,
Laurie

Hi Laurie,
yes that is all we can trust in is the word of God. Blessings to you too.

Such an illuminating anecdote, Brenda. I am far, far too judgmental, and I appreciate your reminder. It's hard for me to fathom a Mind that sees all, but a Mind that could create our physical universe is beyond comprehension. It's in astrophysics and cosmology that I sense glimpses of what God must be.

Hi Louise,
with the limited knowledge of our carnal minds we could never understand a God so great. What I do know is that there is a scripture which says 'His thoughts are for our welfare and not to harm us.' All the wars and fighting going on around the world is caused by man, but there is a way our of it, and that way is trusting in Jesus, the Word of God. My life has completely changed, and still is changing as I learn His ways and thoughts. Take care.

Thanks for sharing that comforting scripture verse, Brenda. I have always believed in God as loving and merciful and not the source of evil in the world. Have a great day!